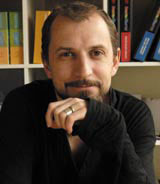 It’s a common enough scene, people comparing the designs of the mobile phones on the table in front of them. But rather than status- and design-conscious teenagers, one of those pawing the phones is Ignacio Germade, who, as director of Motorola’s UK Design Centre, oversaw the design of one of the handsets.

It’s the SLVR, the first baby of the eight-month-old combined UK and Singaporean studio that Germade has set up. The SLVR, an extremely slim handset with conspicuously resolved design, is part of Motorola’s attempt to build on the success of the RAZR phone, diffusing its design language through the range and heightening Motorola’s design credentials in the battle with arch rivals Nokia and Sony Ericsson.

Germade is disarmingly honest about Motorola’s need to reclaim design credibility; he sees it as his role to make objects desirable enough to make people forget their preconceptions about Motorola’s user interface. ‘It used to be crappy,’ he says.

With a zeal and enthusiasm worthy of his Jesuit saint namesake, Germade is rethinking approaches to the way mobile phones are designed. Some are radical, such as distributive architecture that allows phones to be dissipated away from a single object. While Motorola has dabbled in this with Oakley sunglasses and Burton boardwear equipped with Bluetooth, Germade believes that the public is not ready for some of the things that are already technologically possible. But he is also keeps an open mind about novel approaches for phone design.

‘It’s a pity that we are looking at the same references all the time. Perhaps we product designers are guilty of looking at our belly buttons for too long,’ he says. While he cites ‘obvious’ references, such as the work of Japanese product designer Naoto Fukusawa, there are others that are less predictable. Nike, for instance. And he is particularly interested in perfume and cosmetics design, which he thinks is particularly adept at creating objects that look desirable for a low cost. ‘They manage to do cheap things that look good, Armani for instance,’ he says.

Motorola has an alliance with Apple Computer, which will see the iTunes interface being brought to Motorola’s mobiles later this year. There is a hint of exasperation when he is asked if we could perhaps see a Jonathan Ive-designed mobile phone. ‘Each party does what it is good at. We are good at mobile phones, and Apple is good at interfaces,’ he says, before quickly adding, ‘It is obviously very good at industrial design, too.’

At Motorola’s UK centre, Germade oversees a group of eight designers from a variety of backgrounds. While currently based in Basingstoke, all but Germade commute from London, and are eagerly awaiting ‘phase two’, which will see Motorola opening a design centre in London. Despite his role, Germade says he still likes to gets his hands dirty with hands-on design.

The appeal of being a big name designer does little for Germade. ‘It is easy to do “designer auteur”,’ he says. Instead, he gets off by seeing the products he has been involved in all around him. ‘Obviously, you get a kick, it’s one of the reasons you do this job. When you are younger you want things in your portfolio, now I get excited by seeing people using the phones.’

But it’s the PEBL, originating out of Motorola’s Korean studio, that has him particularly excited. Its pet rock shape is actually Zen-inspired, and the clam phone opens in response to a gentle finger stroke. Germade has been using a prototype for the past few weeks, and is smitten. ‘I can’t imagine using anything else now,’ he says.

Though he describes himself as a product designer, Germade’s route to his current job is not an obvious one. Born in Fuengirola, near Malaga in Andalucia, hometown also of Antonio Banderas (‘Print that and I will kill you!’ he says with a twinkle in his eye), he studied fine art before going into advertising. He then came to the UK where, as creative director at 3D digital design specialist Hayes Davidson, he also tried to study for a degree in architecture in his evenings, before giving up after a couple of years. There followed stints at Ideo and Sapient in the US.

When he retires it is to architecture that he wishes to return, but before then there are many more mobile phones to be designed, which millions of us around the world will be carrying round in our pockets.