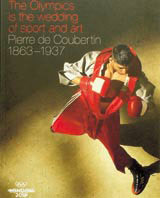 An 11th hour attempt to persuade the International Olympic Committee to choose London to host the 2012 games continues today in a concerted effort by a number of design groups.

The publications concentrate on the strength of London’s contribution in the fields of arts, culture and education and form part of a pack of key selling points given to the IOC at its hotel in Singapore on the eve of the decision, which will be announced today.

Thompson does not sit on the London 2012 design roster, but the consultancy was selected for the ‘critical’ job by chair of the Bid’s Arts, Culture and Education Committee Jude Kelly. ‘It is crucial that we not only demonstrate the culture of the city, but that this is also reflected in the quality of designs we present. I think that Thompson outstrips most other design consultancies in its understanding of projects,’ Kelly explains.

London’s 17-chapter Candidature File, designed by Navy Blue last year (DW 25 November 2004), contained a chapter on culture and education. However, the decision to push this aspect of the bid to the fore came after the cultural element was recognised by the IOC as a key strength in London’s proposal.

The literature illustrates some of the bid’s cultural plans, including The London Olympic Institute, The World Cultural Festival and The Olympic FriendShip – an ocean-going clipper that would launch at the close of the 2008 Beijing Games and sail the world on a four-year ‘voyage of discovery’.

Whatever the outcome of London’s bid, Kelly intends to continue using the literature to inform and raise awareness of these projects with key cultural audiences throughout the UK.

According to Thompson creative director Ian Thompson, ‘If London were to be successful, it would have a massive impact on how the entire country sees creativity. It was our job to articulate [how London’s] commitment to arts and culture differentiates our bid from the competition.’

Navy Blue’s work for the bid continued this week with the mail-out of the last of its seven flyers to IOC members. It arrives today ahead of the announcement at 12.45pm and aims to highlight the ‘legacy’ of sporting achievement behind London’s entry.

Consultancy director Geoff Nicol says that the mailers represent the ‘final distillation’ of the entire bid proposal and have been created with very close strategic direction from London 2012.

â€¢ Olympic Park, designed by Foreign Office Architects, will include the Olympic Village, a Hockey Centre and Velopark