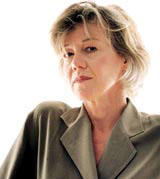 My first encounter with Mary Lewis was in 1988. Unknown to her, Lewis Moberly’s work for Asda wines and spirits had struck Gold in the British Design & Art Direction Awards and I, a freelance journalist, was despatched by Design Week to write a profile.

Ironically, 13 years on I found myself in a similar situation, talking to a woman I have come to know and admire in the intervening period, without letting on that she is about to receive D&AD’s biggest honour – the D&AD President’s Award, bestowed on her by current president David Stuart of The Partners.

The D&AD President’s Award only goes to outstanding folk – in 1995, during her presidential term, Lewis gave it jointly to Richard Seymour and Dick Powell. It doesn’t make heroes, but it recognises their contribution over time.

There is no doubt that Lewis is a hero. People are in awe of her tough approach to producing creative quality, but most respect her hugely, not least because she has steered a course for design to enter new areas, such as own-brand packaging. She has crossed over into brands and identity, and now, with her role of overseeing food and lingerie packaging for Marks & Spencer, into design management.

Lewis Moberly’s work wins awards – a lead the in-house team at M&S looks set to follow having been shortlisted for a DW Award this year for the Chinese takeaway packs. But the awards go beyond the peer group prizes: the consultancy has also won five Design Business Association Design Effectiveness awards over the past 12 years, including a Grand Prix for its hosiery packs for Boots the Chemists.

Lewis had a different approach to her work from the outset. She studied fine art and printmaking at Camberwell, and when she left had no desire to work in design. But, as a self-starter, she decided to teach in art schools so she could use the printmaking equipment for her own work during the holidays. She says her knack of bringing out young design talent – a trait at Lewis Moberly – started then.

Hence, though mixing in art circles – and married to a painter – she found herself teaching graphic design without having ever done any. She decided she should.

Design at that time was dominated by the likes of Wolff Olins, Minale Tattersfield & Partners, Pentagram and the old Michael Peters Group, but it was still very much linked to advertising. Lewis chose advertising.

“I found the world of advertising more exciting,” she explains. “I could do design within it, and work freelance.” In advertising she learned “how powerful the idea is”.

She is very clear about the difference between advertising and design. Advertising is “transient”, while design is “what you take home”, she says. She sees no conflict between the two, which has stood her in good stead for years of commitment to D&AD, an organisation which aims to straddle both.

Lewis is equally clear about the difference between art and design – and her reasons for eventually choosing design. “Communication is very important to me,” she says. “I need a brief to communicate to someone else and in art there is no brief.”

It was through advertising, at Foote, Cone & Belding, that she met Robert Moberly, her partner in business and life. He held a strategic and managerial role within the agency, but “he wanted to do something different”, says Lewis. She sees him as highly creative. “He is my greatest critic. He is more rational and wise, while I can be impetuous,” she says. In 1984 they set up Lewis Moberly.

“We set out to make the product everything,” says Lewis. “We were conscious that we had to produce a body of work we were proud of.” The quality brought an offer from Sir Martin Sorrell early on in his acquisitive career, she says, but Lewis and Moberly resisted. There are no plans to sell out now, though with the consolidation within the industry “we’re having to fight a lot harder for what’s left”, says Lewis. It is perhaps significant that much of the consultancy’s work is now for overseas clients.

Along the way, Lewis had met and clicked with various clients. These included Keith Clarke, who was then trading director at Asda. “Nothing had yet happened on the supermarket front,” says Lewis. “But the adventurous consumer was beginning to emerge and the supermarkets were starting to realise the potential.”

For Asda and Lewis Moberly that potential manifested in the “huge challenge” of some 300 own-brand wine and spirit labels to be completed on a tight budget within two years. The brief was that “it had to be a turning point and put Asda on the map”, says Lewis.

Lewis’s solution was to commission artists to create the labels. Fees were minimal, but each got to sign their oeuvre and the design was “undebated”, says Lewis. The awards flowed in. But, more importantly, several of the designs are still on Asda’s shelves.

Within design Lewis became the queen of own-brand, working also for Pentagram partner John McConnell at Boots on what she describes as “the next defining project” – the Boots hosiery packs. “John was ahead of his time [as external design manager at Boots],” she says. “The design ethos he imparts takes a philosophical and cultural approach. “I’ve been lucky to have partners like him who love design as much as I do.”

But own-brand is not the whole story and branding and identity are in the mix now. It started with the Classics Malts range for United Distillers, which yielded the ground-breaking Oban packs. Then came Bells scotch whisky, Heinz, Milk Tray, Bahlsen biscuits and the Duchy packaging range. Lewis has since broadened beyond fmcg to take on packs for the Seymour Powell-designed Charnos BioForm bra and won awards for tough products like Waitrose’s Diva sanitary protection range.

“I have a curiosity about people, which inevitably takes me down a branding route. You have to put yourself in the shoes of the people you’re talking to,” says Lewis. “I’m passionate about brands – corporate or consumer the approach is the same.”

And that approach? “I look to life, not to design,” she says. A recent Paris show of the consultancy’s work was called “Making the ordinary extraordinary”, which is what Lewis prides herself at doing. She enjoys the challenge of limited budgets – “the best design is often born out of that,” she says.

Lewis Moberly projects often start with a story – one Lewis has made up. For the Oban packs, for example, Lewis and Moberly spent a couple of weeks in the area, absorbing the place and its stories. “Stories get me into what I’m going to express,” she says.

The team is very important to Lewis. Lewis Moberly is maintained at around 30 staff, half of whom are designers working as one team under Lewis. “We can never be huge as we would have to run independent teams,” she says. She writes the project briefs, interpreting them into positive language, and designers often compete to come up with best idea. The criterion for the choice of the best of these is “Is this the best that we can do?”, says Lewis, and as many as fit that bill are fielded to the client, be it one or 60 ideas. “Stars” who have gone through the system include Bruce Duckworth, Milan-based Susanna Cucco, Geoff Halpin and Jerome Berard.

Lewis comes back to the importance of working with “confident” clients. “I like doing scary stuff, ” she admits. “But it’s not good to work with people who don’t have passion.” Her best work, she says, involves working directly with brand-owners such as the Bollinger family or Portuguese wine-maker Salvador Guedes, owner of Mateus RosÃ©, among other local brands.

This is where M&S comes in. “Suddenly, I’m in a major institution, working from the inside. It’s very hands on,” she says. The Design Forum, which includes all interested parties from marketers to buyers, is about problems and opportunities, she says, for a client which previously saw design as a resource rather than a driver.

“It’s interesting to be where I can share things I have learned,” she says. But to balance the M&S role, she says she makes sure she always has a design project of her own running in tandem. She says her stint as D&AD president forced her to delegate better within Lewis Moberly, which has stood her in good stead for the M&S job. But it hasn’t stopped her being involved in projects such as the consultancy’s website – www.lewismoberly.com – though she claims to be computer-illiterate.

Lewis has come a long way since Camberwell, but she says that the main motivator behind her work is fear. And she hasn’t forgotten her craft origins either. “If I smell the solvent they use in print rooms, I still get a real high,” she says.

John Gorham – ‘designs with a story and a strong personality, such as Winsor &Newton inks’

Marcello Minale – ‘the singularity of the idea’