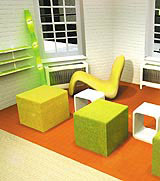 Next month sees the launch of what is claimed to be a revolutionary concept in serviced offices, Eoffice, with interiors by Square Dot and branding by AshleyCarter.

Eoffice opens in London’s Soho on 2 April. It is designed to offer flexible, cost-effective offices for individuals and small businesses. It claims that its point of difference versus the traditional providers of serviced offices is that Eoffice provides fully equipped, Internet-ready workstations in a contemporary environment, complete with break-out areas. All elements are flexible and can be adapted to different users’ needs simultaneously.

The company has plans to open offices in the UK and Europe, however it refuses to detail them beyond confirming that it is looking at opening sites in London’s Clerkenwell, Notting Hill and Camden in the next ‘two to three years’.

‘We are in unknown territory because we are trying to understand people’s behaviour in an environment that doesn’t yet exist,’ Kramer says. ‘Ultimately, it is a co-operative working environment.’