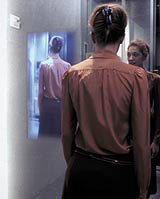 How times have changed from the early days of the Internet. Then it was enough for a retailer to put a few zany coloured iMacs in its store tuned into the company website to show customers what a happening, techno-savvy operation it really was.

Some still do that. But with the Net now a necessity rather than a novelty, things are moving on. Retailers and their designers are having to be more sophisticated in their approach to all digital media, with any screen-based facility performing a useful function. After all, if most of us can log on at home, why duplicate that function in a shop?

This transition is being played out against a background of increasingly blurred boundaries between retail and e-tail. Despite the dotcom slump, on-line retail sales rose 142 per cent in 2001, according to Verdict, and are expected to increase their proportion of total retail sales, currently standing at just 1.53 per cent. Yet instead of the clicks-versus-bricks conflict predicted initially, the talk is of a multi-channel approach, throwing up some curious hybrids – the boutique where you can try on clothes, but only purchase over the Internet (Oki-Ni) and the Website retailers that turn into actual shops.

Opinions differ on the future role of Internet/ screen-based technology in retail. Four IV managing director Chris Dewar-Dixon feels that in the UK, it is still ‘a bit of a non-event’.

‘All you can do is put an Internet site up in the store and hope that people will interact with it,’ he said, adding that many people are still wary of publicly using technology and that clumsy, token use of it can ruin a retail ambience.

On the other hand, Prada has been investing heavily in Internet and screen-based technology in a new retail concept in New York. Its designer, OMA, believes smart technology that enhances the customer retail experience will soon take off and is already talking to other retailers about similar projects. And 6a Architects, responsible for Oki-Ni, likewise anticipates further Internet-driven change in retail.

‘It’s the first serious rethink of the possibilities of retail since the explosion of minimalism in the 1980s,’ says 6a architect Tom Emerson.

But there is general agreement that usefulness is the key to whatever form it will take.

Yet an Internet presence can have real advantages for some retailers, especially those dealing with large amounts of fast-changing information.’ It’s most powerful in the retail environment as a demonstration rather than a facility in itself,’ says Peter Champion, a director of First, which is currently rolling out a retail concept for Abbey National incorporating Internet terminals for customers.

Here, he says, they can be truly useful, especially when staff help demonstrate the way that e-banking works and interested customers can register for it there and then. Abbey National found it also succeeded when customers were waiting to talk to an adviser.

This is also the case within the travel industry, where staff can demonstrate flight and destination information on screen as in Travel Choice, designed by Design House, or customers can use a touch-screen Intranet before talking to consultants to narrow down their choice. Likewise Design House’s showroom design for Toyota includes an Internet interface for customers to research car information in a spirit of customer empowerment that contrasts with traditional car showroom sales techniques.

The aesthetics of technology in retail are also changing and becoming subtler, allowing a more gallery approach to dominate. In Four IV’s recent work for Mulberry there is no obvious till equipment to mar the aesthetic. The scanner is built into the elegant desk and the till tray concealed. At Oki-Ni the design is as ‘non-techy’ as possible – more installation/ domestic roomset than shopfitting – with customers given discrete laptops to place their order on.

‘In a traditional retailing environment, the end of any successful visit is the sale at the till,’ says 6a’s Emerson. ‘Oki-Ni is explicit that the shopping is leisure with no point-of-sale, so the store isn’t organised around the single transaction.’ The concept has been a success, says founder Paddy Meehan, with more department store concessions opening this spring.

The exception to the new subtle approach to technology is where the products and services themselves are screen-related, such as Creative Action’s retail concept for digital television retailer You Me TV being introduced this spring. This will encourage customers to browse the products on Internet-based flat-screen terminals by inputting their postcode to see the availability of services in their area or searching by budget, product type or service provider.

The stylish customer-oriented approach is personified in Prada’s New York Epicenter store designed by OMA, which opened in December last year, where the technological elements are part of the aim to create as rich, diverse and varied an environment as possible.

Working with OMA, Ideo created the invisible technology that allows Prada staff members to choreograph the in-store sales experience and give them access to product information and stock availability with a hand-held device.

Within the interactive dressing rooms, Ideo developed a new manufacturing technique for the transmitting antennas to fit in with the dressing room’s aesthetic. Direct customer-technology interaction takes place inside the dressing rooms where one wall in the dressing room is mirrored with a large plasma screen embedded into it. It gives the customer a 360-degree view of their outfit. The customer can also use the screen to search for different colours, styles, sizes and ‘bookmark’ items within a ‘virtual closet’ accessible by Internet at home. This facility allows for delayed purchase, with the store acting as a local fulfilment centre.

‘Prada is interested in reality and getting real people into a real space, but it wants an interactive environment,’ says OMA’s Markus Schaefer. ‘The idea is to couple the digital realm with the physical realm.’

Spatially, the Internet also has store benefits for retailers with small sites and bulky stock. This ‘tardis’ approach has been used in the US by Banana Republic. When it introduced a lifestyle/ furniture range, it didn’t have the store space to show all the products so instead displayed a few choice items alongside an Internet point exhibiting the full product range.

Similarly in the UK, the V.Shop record stores, designed by JHL, were able to give their relatively small selling space over to the very latest music by putting the back-catalogue on to a screen-accessed database within in-store kiosks. Customers can then buy on-line, as well as at the conventional counter. This ‘elastic wall’ concept allows the shops to be virtually enlarged, says a V.Shop spokeswoman. The screens are also set up to use the Virgin Group’s Internet sites. Likewise, Design House’s concept for Ladbrokes betting shops allows for the customer to use Ladbrokes’ other brands and services via the Internet as well as placing on-line bets. First’s Champion also expects the Internet to have potential uses in a new store concept it is developing for Scholl footwear.

Non-retail space was used by Rodney Fitch & Co in its showroom concept for Robert Dyas, which houses terminals above the conventional store showing its own and related products. This multi-channel approach allows for the customer to delay their purchase, maybe to go home, measure up, and then buy on-line.

‘You have to have a showroom because the current consumers are traditionally used to buying product in that way. Ultimately, people will always want to see and touch the product,’ says Rodney Fitch & Co director Neil Whitehead.

But he anticipates great changes in retailers’ approach over the next five or so years, driven by the next techno-savvy generation of consumers, those now 13 or 14 years’ old, as they come of age, yielding even more emphasis on multi-channelled delivery. This will, he predicts, be fuelled by a great surge in e-tail activity as sites finally get to grips with fulfilment through the much-discussed prospect of 24-hours-a-day secure, drop-off zones rather than delivering to the customers’ door.

It’s not just the Internet that’s driving change – more screen-based digitally displayed information seems destined to be heading into our stores. Whether in the form of shelf-based information screens activated by barcodes or in special offer fast-changing information panels, perhaps run in conjunction with live Internet feed displaying local news and information. This ensures that designers are likely to be dealing with more, rather than less, client requests for screen-based features in traditional retail.

So those who write-off the Internet’s influence on store design may well end up eating their words. PassÃ© gimmick, visual cacophony, or useful and sophisticated customer-oriented information? Only time will tell.

The year of the cat