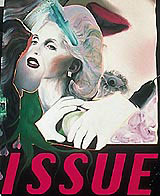 Art prizes. What a pile of pants they are, right? Let’s face it, the Turner Prize is little more than an exercise is self-promotion for the Tate, Nick Serota, Channel 4 and, lagging a poor fourth, a bunch of artists whose work, presented in a noncontextualised ceremony and exhibition, is so inaccessible that it depressingly does the exact opposite of what it should do – namely promote great British art to the great unwashed masses.

Plus it’s deeply annoying when an already well-established artist receives a huge wad of cash they patently don’t need, when thousands of graduates are churned out annually without a pot to piss in, let alone an affordable studio space in which to put it.

So cheers to Beck’s and the Institute of Contemporary Arts, who this month unveil the third Beck’s Futures exhibition featuring ten emerging artists who collect £4000 each just for being shortlisted; which will at least pay for that pot and studio for a year.

The final winner gets £20 000 too, which makes Beck’s the biggest art prize in the UK. Plus, some of the work will have been specially commissioned and the show will go on to Glasgow and Sheffield after its London run.

And, to top it all, the judges – Marianne Faithfull, Julian Opie, writer and painter Harland Miller and curator Saskia Bos – have selected a shortlist that includes some of the hottest young art talent exhibiting in a show that coherently and deftly illustrates the skillful crossover between art, design and architecture in current fine art practice. And they’ve done so through a pleasingly wide-ranging body of media, including film, photography, video, sculpture and, hearteningly for fine art traditionalists, a lot of painting.

I’m not a betting gal, but if I were my money would be on Belfast painter Kirsten Glass (one of only two women in the show), who uses a bold graphic collage style to compose slick, yet weirdly flat, emotionless magazine paintings that undermine our model-obsessed culture and present us with brash B-movie vamps with big hair and an attitude to match. Text plays a large part, puncturing the work in witty and arresting ways in terms of content and layout.

Paterson’s show in October at the Henry Moore Foundation (with such heavyweights as Denys Lasdun, Erno Goldfinger, Mary Martin and Victor Pasmore) should see his success assured, even if he doesn’t scoop top prize at the ICA.

And if he doesn’t win the prize, it would be no bad thing if Dan Perfect did; not least because the Central St Martin’s College of Art and Design graduate’s candy-coloured canvasses populated with kooky games-graphics figures make you feel good – which at the tail end of a bleak winter is no bad thing.