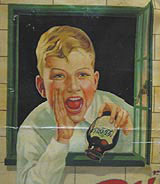 The refurbishment of a provincial museum, by John Hart Design, has led to the discovery of several 1950s London billboard advertisements, which are to be auctioned on Friday 8 March 2002.

Haslemere museum, which received Heritage Lottery Funding in 1999 to the tune of £500 000, is completely refurbishing its interiors. The project is scheduled for completion in July.

The old advertisements were found during early refurbishment work, depicting products from Swan Vestas to Weetabix and Bovril from the 1950s, when the museum was last redesigned. They will be sold at an auction in Haslemere to raise funds for the project.

John Hart Design is designing display cabinets, visual material and lighting for the galleries, which include taxidermy, archeological finds and even an Egyptian mummy.

The galleries will incorporate basic interactive elements, but the budget did not stretch to include any digital work, says curator Angela Gill.