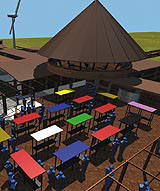 Plans for RFA Designers’ attempts to regenerate a South African township with a tourism facility selling locally manufac-tured products will be unveiled later this month.

The group won the work in a creative pitch at the end of last year. It followed a trade delegation last January organised by Trade Partners UK to South Africa, attended by UK exhibition groups including Event Communications, RFA and Land Design Studio.

RFA is designing a tourism ‘village’, in collaboration with local architect Magqwaka Associates, to be based at the Khayelitsha township just outside Cape Town.

It will feature a district museum, tourist information centre, crafts workshop, markets, dance and theatre spaces and a restaurant.

The different elements of the village will be housed within internal spaces and courtyards. It aims to train the local people to produce furniture, textiles and food, and will also incorporate traditional and contemporary African artefacts as well as a local natural history centre.

The attraction is scheduled to open at the end of the year.