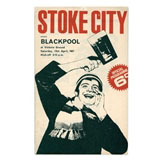 Football programmes have evolved from amateurish, do-it-yourself rags into slick, professional-looking glossies. But, despite the changes, the old ones are still the best, says Yolanda Zappaterra

Some 15 years ago, two seemingly unrelated things converged in England that had a lasting, detrimental effect on English football – the arrival of the Premier League and the printing revolution that was desktop publishing. For a non-football fan, there was absolutely no correlation between these things, but a regular visitor to any club ground, be it Premiership or Vauxhall Conference, would have suddenly found that wonderfully idiosyncratic, individualistic and ever-inventive companion to every football match – the match programme – turned into a bland, corporate-looking, glossy affair that was as dull as it was interchangeable.

‘More money was coming into the game from sponsorship, and the companies giving that money had a glossier vision of how the programmes should be. These sponsors needed what they saw as an aspirational environment for their advertising, so the more quirky, individual designs steadily disappeared, especially as the effect of desktop publishing meant that many clubs could produce “higher quality” programmes cheaply and easily,’ explains Damon Murray, co-founder of graphic design consultancy and part-time publisher Fuel. 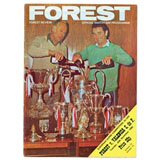 Some of us older fans will have our own mildewing stacks of these quirky pre-Premier publications that we simply can’t bear to part with (despite their presence on Ebay for 10p), but we and younger fans of both football and graphic design should welcome the arrival of Match Day – Football Programmes, by Bob Stanley and Paul Kelly, a Fuel publication containing 450 full-colour match programmes from 1945 to 1992.

Intended as a celebration of the best period of football programme design, rather than a complete encyclopedia of football programmes, Match Day contains a great array of programmes for all the league clubs and a handful of non-league teams and national games. It’s a collection that reflects not just the individuality and personality of the clubs themselves, but also five decades of English graphic design. ‹ Murray says, ‘It was a time before big money was involved with football – a Corinthian sporting spirit still existed, and that’s reflected in the programmes. Pre-1993, they still contain an element of the vernacular that was ironed out when the Premiership began.’

Looking through the book, it’s easy to see what Murray means: here are covers that reflect photography and fashion trends; covers that take their aesthetic from the likes of Tom Wolsey and Town magazine; covers that are conceptual in approach and printed on newsprint in newspaper formats; and covers that reflect Swiss Modernism in their rigorous approach to layout. Others are purely typographic and stand out as bold graphic statements, in a way unimaginable now on football programmes that are nothing more than glossy marketing material, filled with page after page of unimaginative match shots, player shots and ground shots, interspersed only with ads for the club shop, club replica kits, club text service, club credit card, club corporate boxes and club executive travel packages. All wrapped in a cover featuring, you guessed it, an action shot at the club ground. 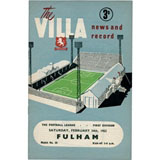 Murray is quick to admit that the rot set in before the Premiership. ‘There are a few examples in the book where the effect of corporate sponsorship had already started to taint the programmes – for example, Derby County posing on a Co-op milk float on the front cover of the Ram,’ he says. But he is right in his view that, in concentrating on the era between World War II and the Premier League, Match Day captures the best of programme design.

The 1970s, in particular, stand out, not least for their willingness to experiment graphically and with production techniques, but also conceptually, believes Murray. ‘Generally, the programmes reflect the graphic trends of the day. It’s particularly interesting when a club uses its graphics to make something more than just a programme. An obvious example is John Elvin, who designed the Sky Blue programmes for Coventry City, where graphically you can see photography, fashion and sport come together on the page in a really inspiring way,’ he says. His personal favourites are many: ‘The Redhill v Fulham programme with Mr Best looking his best in a classic Fulham kit from the 1970s; the Aston Villa programme with a road sign pointing to the city centre, Aston, and Aston Villa Football Ground that looks like it was photographed from the Bullring on a very dull day; Stoke City using line drawings to great effect; and Chesham v Wealdstone, a typical non-league programme… an area that still retains some interesting design elements, because they’re largely run by enthusiasts at a grass-roots level,’ points out Murray. 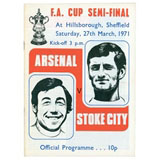 League club fans, he advises, would be better off turning to club fanzines – ‘where the personality of individual clubs (and their fans) is more prominent’ – or, indeed, to Match Day, which clubs might learn something from too. ‘It’s interesting that no modern Premiership club seems to have taken the obvious brand leap – to produce a well-designed and distinctive programme that reflects the individual character of that particular club. Perhaps this book might provide some much-needed inspiration,’ notes Murray. Such a leap of imagination is as likely as Chelski not achieving their hat-trick this season, but, for most football fans, each season is a triumph of hope over experience – so here’s hoping.

Match Day: Football Programmes by Bob Stanley and Paul Kelly is published by Fuel at £29.95 and distributed by Thames & Hudson/DAP

Seymour warns of split in profession