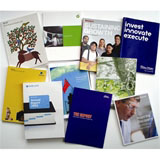 The annual report sector is burgeoning, with the number and size of publications on the rise, thanks to more demanding guidelines and a climate of corporate mistrust, according to the latest research.

A study conducted by branding and print design consultancy 35 Communications found that annual report length for FTSE 100 companies has increased by 15 per cent on average since last year. And, while four years ago 60 per cent of these companies produced just a single report to explain their business to investors and stakeholders, now 53 per cent produce three or more reports.

High-profile corporate malfeasance and reporting scandals in the US, such as the Enron and WorldCom/MCI cases, have led to tighter restrictions by the International Financial Reporting Standards, as well as the introduction of the Sarbanes-Oxley Act in 2002. At the same time, a growing cry for demonstrable corporate and social responsibility has resulted in more detailed and dedicated CSR reports.

‘There has been a loss of trust in general and the kick-back is tighter regulation that is more prescriptive about what goes in. This increases the volume of information and the size of the reports,’ says 35 Communications director Nigel Forsyth.

The average number of pages in an annual report was 132 in this year’s survey, up from 100 in 2003 and 116 in 2005, with some reports exceeding 200 pages in length. This growth in the size of annual reports demands different production techniques and a particular approach to design, according to Forsyth. He says that skills in effective information design are coming to the fore as the volume of data that is made available grows, not least because the average retail investor spends just three minutes reading an annual report.

‘Design consultancies producing annual reports are required to have a better grasp of information design, and not just to produce big, glossy, international photo-shoots. Understanding information is very different from producing a marketing job to make a company look sexy,’ says Forsyth. ‘People should be able to read the reports in a language they can understand and which tells them what is going on, what the board of a company thinks and what they are going to do.’

CSR is increasingly a key strand in how companies want to communicate with investors and stakeholders, with 85 per cent of the FTSE 100 businesses producing a CSR report last year, and the number of hard-copy reports growing at about 8 per cent each year, according to Forsyth.

Forsyth’s consultancy worked with Mike Tuffrey, director at corporate and social responsibility consultancy Corporate Citizenship Company, to investigate the CSR reporting sector. However, they found that many annual reports did not connect the business strategy with CSR, with the latter often treated as an ‘add-on’.

The research comes at time of uncertainty for corporate reporting rules, after Chancellor Gordon Brown scrapped plans last November to introduce mandatory Operating and Financial Reviews for all listed companies. These rules would have required companies to report on Key Performance Indicators each year, outlining how a company measures the success of its business and including an assessment of its environmental and social impact.

However, the OFR was replaced with a simpler Business Review, which complies with European law. There are still no legal obligations on a company to produce a CSR report.

• 85 per cent of companies produce a corporate responsibility report

• 48 per cent of companies prepared an Operating and Financial Review despite its abolition; the bulk of the remainder used Business Review format

• 57 per cent are identifying Key Performance Indicators, but this falls to 26 per cent for non-financial KPIs