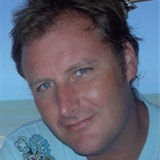 Scottish furniture company Outgang aims to be a design business with a difference. Founder Phil Lynch tells Trish Lorenz about his Brazilian inspiration and his approach, which looks to combine business savvy and creativity

When is a designer not a designer? It sounds like the start of a bad joke, but it’s a question that Phil Lynch (pictured top), managing director of budding Scottish design business Outgang, is happy to answer. Lynch sees Outgang not as a design group in your traditional sense, but as a vehicle for creating ‘innovative, art-based furniture’, while admitting that he’s definitely not a designer himself. Instead, he’s something closer to a Scottish Thorsten van Elten.

‘I don’t profess to be a designer, but I do have ideas and an eye for how things should look,’ says Lynch. ‘I come up with the initial concept and then work with artists, architects and designers to realise products. It works best if you have a tight brief, but leave enough freedom for designers to add their own flair and style.’ 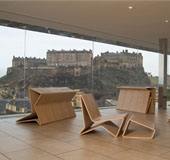 Lynch’s CV is peripatetic, including stints as a psychiatric nurse, an estimator for a commercial caterer, a business development role at facilities management company Vivendi and a property developer. Outgang was born in 2004, when Lynch decided to move back to Scotland after a very long holiday spent relaxing on the beaches of northern Brazil. Here he noticed what he calls ‘multi-functional seating systems’, but which most of us would call a piece of wood that can be sat on or turned on its head and leant on.

‘Everyone lives outside in Brazil and people can’t afford furniture, so they design things almost by chance. In one little village they had seats that were low for relaxed seating by day, then upended to be leant on at night,’ says Lynch. ‘I’d been thinking about different seating positions for a while and knew there’d be a market for outdoor furniture in Scotland, because the smoking ban in pubs had just been introduced.’

And so the idea for Series X, Outgang’s first product, was conceived. To develop the concept, Lynch approached architect Graeme Massie, who developed the design and ensured that the products worked ergonomically. The result is a range comprising table, chair and footstool that realise Lynch’s Brazilian epiphany by offering several seating positions, and can be used both indoors and out. 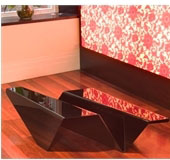 Series X was followed by another versatile product, the Shadow Screen. Designed by London-based artist Jacquie Poncelet, it is made of Dalsuple rubber, created using computer-aided cutting techniques, doesn’t fade and is waterproof. Both products say something about Lynch’s vision for the Outgang brand – dual purpose, indoor and outdoor – with flexibility of use a key component.

Outgang will launch a third product, the Space table, also designed by Massie, at 100% Design in London this month. While its furniture is currently only available on-line, Lynch hopes to open a retail outlet, probably in Glasgow or Edinburgh, as well as remaining on the lookout for new ideas. ‘I’m looking for products that as well as being strong technically are also very art-form led, sculptural almost,’ he says. ‘It’s important for pieces to achieve a balance between style and ergonomics.’

But what’s in this for designers? ‘The hard part for designers is getting their idea to market; you need to spend as much time on the commercial side as on the design side,’ says Lynch. He points to a personal bugbear, copyright protection, as an example. ‘Lots of designers get abused. If you create a great design, chances are someone will take it, copy the idea, manufacture it cheaply somewhere and flog it. You need to spend time and money getting the copyright for the whole of Europe. With Outgang we can bring the business and commercial side together with good design and we stand a much greater chance of success,’ he says. 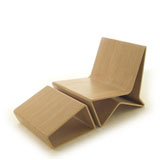 Lynch maintains he’s committed to developing a fair relationship with the designers he works with. ‘We’re quite a close team,’ he says. ‘There’s a lot of brainstorming around ideas and materials, and, along with paying for the design, I also make sure there is a strong royalty paid for each piece we sell. Relationship and trust is important. A gang is a bunch of friends. It’s the same here and I want to keep developing that.’