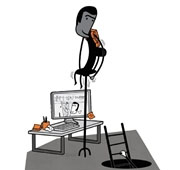 For designers hoping to cross over into a different sector, it is becoming increasingly difficult, as employers demand that the right boxes are ticked. John Stones looks at ways of bridging the gap and making that leap.

Life doesn’t always work out quite the way that you expect. Often, of course, this is hardly cause for celebration, though sometimes the results can be surprising. For instance, Marcello Gandini, the Italian car designer responsible for a string of epoch-making designs, such as the Lamborghini Miura and Countach, actually started out as an interior designer. Richard Seymour, one half of celebrated product design consultancy Seymourpowell, was originally a graphic designer. And Wayne Hemingway used the money from his successful fashion brand Red or Dead to set up a consultancy specialising in social design.

But, for many designers, there is the very real fear of being typecast. Becoming a small cog in a big machine – a Taylorism of design – is not what many envisaged when they ventured into a career in design. What happens if one morning you wake up and think you can’t carry on designing, say, packaging for the foreseeable future? The answer, most recruitment consultants will tell you, is that it’s very hard.

Yet designers wishing to cross disciplines or sectors is one of the most common enquiries, says Jeni Smith at Periscope. The usual response, however, will be a diplomatic smile. It can and does happen, but, on the whole, says Valerie Gascoyne at recruitment consultant BDGXchangeteam, designers ‘have to stick to their knitting’.

Some areas are more notorious than others in this regard. For instance, says Gascoyne, ‘Annual report specialists would find it very hard to move on to another discipline.’ Packaging is mentioned by many recruitment consultants as an area that is especially ‘picky’. A mixed portfolio will often be rejected, say the recruitment consultants, perhaps by an employer feeling that he or she is being fobbed off with an inferior candidate.

Network’s Stuart Newman says, ‘Consultancies are incredibly specific in what they want, even down to rejecting someone just because they don’t have knowledge of a particular software package, something that they could pick up in perhaps a week or two. It’s getting tighter and tighter.’ He adds, ‘Twenty years ago, things weren’t so specific. It used to be more about creativity, but now everything is very commercial.’ A creative director might now not just look for someone with corporate branding on their CV, but experience of, say, banks, he says.

Steve Crompton at Cream agrees. ‘There is such pigeon-holing in this country. I wish design consultancies would not be so blinkered and recruit on talent, rather than a folio of one style of work. Some of the best work I have seen this year does not come from the UK, but Australia and South Africa. Most consultancies in those countries are multi-disciplinary – it works there, so why not here,’ he says.

The first years after graduation are crucial and allow some flexibility in your career path. ‘The further up the ladder you are, the more difficult it is to move discipline,’ says Fiona Watson at RPCushing. So what are the strategies to stop yourself being cornered? If you were thinking that larger consultancies might offer the chance of moving sideways or trying your hand at different things and building a more diverse portfolio, think again. With some notable exceptions, Watson says they tend to be even more exacting and specialised in their requirement.

The good news is that a shortage of designers is being reported by some of the recruitment consultancies. But this has yet to open things up, to the frustration of many recruitment consultants. Karina Beasley at Gabriel Skelton takes a slightly different view, suggesting there is plenty of flexibility for candidates who can show that they are ‘ideas, rather than skills, people’.

Clare Hatt at Aquent spots another opening. ‘I think many new setups or breakaway studios now need candidates with multi- disciplinary skills, so they have to be prepared to see people’s CVs that are a little more varied,’ she says.

Retraining, for those brave enough to go to the back of the queue, is another option and, given the current strength of the Web design sector (and the money on offer), many recruitment consultants point to the print designers who are busy learning multimedia skills. Paula Carrahar at Major Players points out that while graphics has traditionally been a gateway into packing and branding, graphic designers are now also busy expanding into the moving image.

If retraining or learning new skills doesn’t appeal, Gascoyne’s advice is to work up an alternative portfolio. Sometimes, says Beasley, this might mean taking time out and working on a project in your own time to prove you have the skills. Or you could set up on your own and see how specific you are about who you want to work with.

‘A couple of people have, like me, diversified into furniture and interior design from the course, which is industrial – quite “iPoddy”. My radiator is going into production and I am doing interior design for Soho Bars and Clubs, a job that came through a friend who initially just wanted some visuals done. After all, the skill sets are the same. It never occurred to me to study interior design before – it’s an interest that developed in the course. I think I have the advantage that I am not jaded and haven’t studied it to death. Every job I do, I think that is it, but something else comes along. If the companies don’t approach me, I will approach them.’

‘My work is very varied. I can be doing a magazine one week, brand identity the next, and then a big tactical brand job working alongside an advertising agency. Before joining Start Creative I did a lot of homework, and part of that was making sure I would have varied work. It is easy to get locked into things, and it can become a bit restricting even if you become quite good at it. Everyone needs a break. You need to be doing different things and it all feeds into the work. It’s good to feel nervous.’

‘In the early stages of my own career, I moved jobs from a corporate identity and literature consultancy to a packaging agency. It was difficult, but meant I was less easy to “put in a box” and picked up a broader range of projects and experiences. Inevitably, I was “boxed” and specialised in consumer branding and packaging for a number of years. But five years ago I found my career took me back to my roots of corporate design. I believe that as brands develop and new technologies open up even more channels of communication, designers will be forced to think more broadly than within their favourite discipline. It may mean that a few of us have to get out of our ‘comfort zone’, but that’s not a bad thing.’