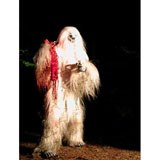 Gore blimey, it’s enough to put you off your lunch. A visceral fright-fest of videos, photographs and sculptures by German artist Christian Jankowski, The Frankenstein Set is steeped in the scarlet gunk of horror movie-making – even using professional collaborators to achieve its desired effects, as London’s Lisson Gallery is eager to relate.

Also lending helping hands (or prosthetic limbs) are delegates at a Chicago horror convention, whom Jankowski asked to act out their ultimate revenge fantasies. Unsurprisingly, given his survey sample, they don’t think much outside the costume box: cue demonic butchers, blood-crazed werewolves and Exorcist-style poster children. But perhaps that’s his point. Have the conventions of the genre formalised these people’s imaginations? 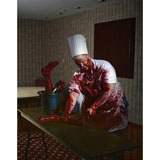 Jankowski’s previous projects – about TV evangelism, karaoke and Hollywood disaster films – show some interest in the power of suggestion to invoke collective hysteria or, at least, a kind of conformity. Oddly, that sounds like grist to the Daily Mail’s mill. Yet if, as the poet John Burnside writes in a very different context, ‘we are, all of us, walking libraries of the unspeakable’, then Jankowski borrows only the straight-to-DVD titles that couldn’t keep their mouths shut.