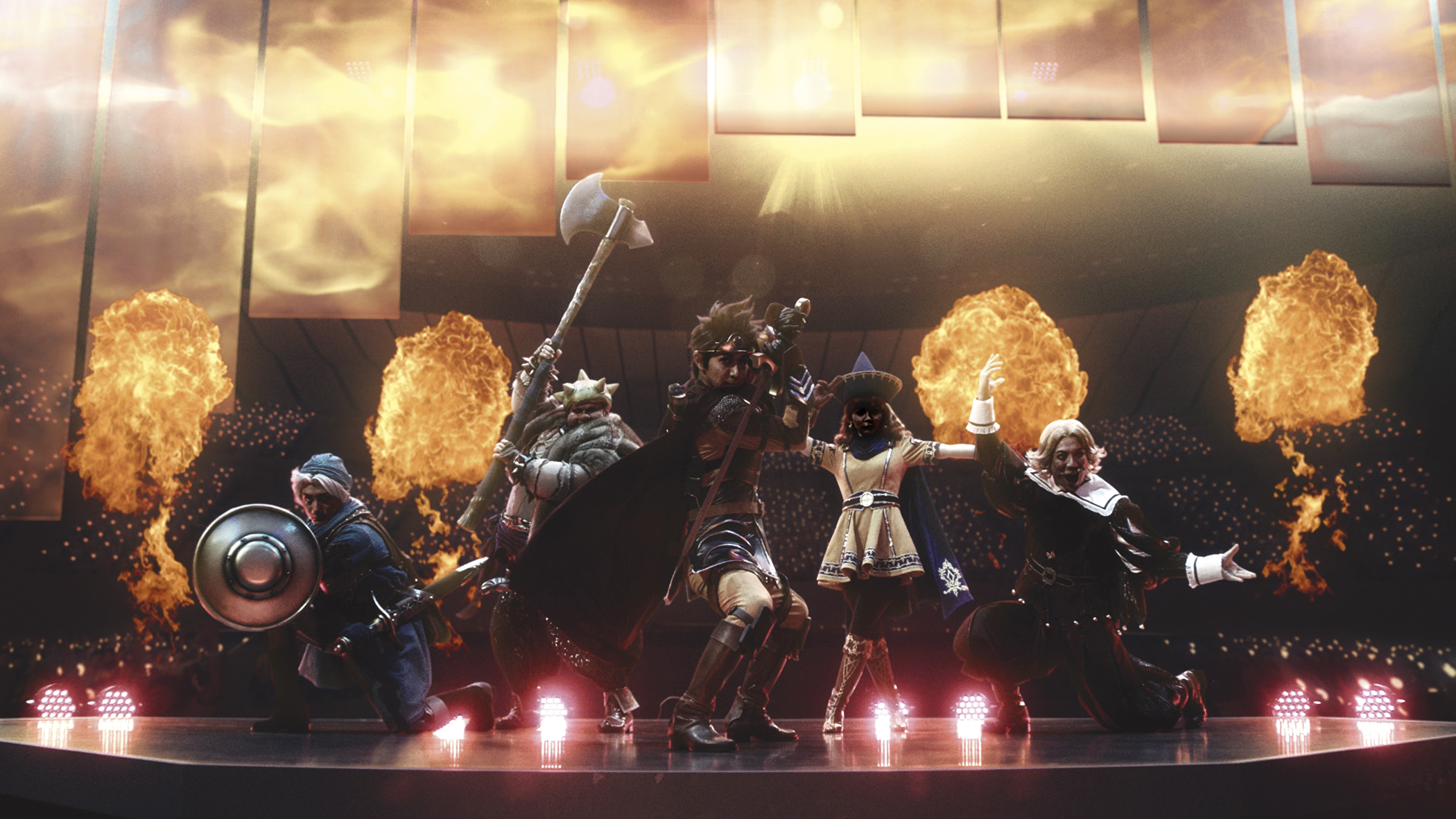 Gaming is generally a solitary activity, and interactions with other players tend to take place through the online world. So how can a virtual game be transformed to a real-life stage show, intended for a mass audience?

Set design and architectural practice Stufish is used to creating stage shows, such as for tours by Madonna, Queen and Lady Gaga, and the musical Jesus Christ Superstar.

But the consultancy’s latest venture has been quite different – they were tasked with transforming cult Japanese fantasy video game Dragon Quest into a narrative-driven spectacle, to mark the 30th anniversary of the Nintendo-owned game. The show is currently touring theatres across Japan and will see up to 400,000 visitors in total.

Interacting with the audience

While gamers are able to influence consequences within a game, watching a large-scale theatre show, pop concert or musical is generally a spectator-sport, where audience members peer into a box rather than interact with the characters.

Stufish, however, has tried its best to make Dragon Quest Live Spectacular a participatory show. Audience members are able to influence on-stage action through individual wristbands which enable them to vote for plot twists and character actions and weapon choices in advance.

The set itself also incorporates dramatic use of projections, screens and 3D mapping, plus multiple stages scattered around the audience space, which aim to involve the audience “in the magical world of the video game”, says Stufish chief executive officer Ray Winkler.

The graphics and the costumes had to also be true to the computer game, says Winkler. “When you’re in a 360° arena environment, there’s so much visual smog,” he says. “Things like trussing, and cables from the rigging can obscure what’s happening in the show, and it’s obvious you’re in the real world – we tried to recreate the landscape you see when playing the game on a laptop, in the digital world.”

To do this, Stufish created moving, island stages across the entire arena floor space, including where the audience were seated, which allowed on-stage characters to walk through the crowd.

“It was difficult to direct” 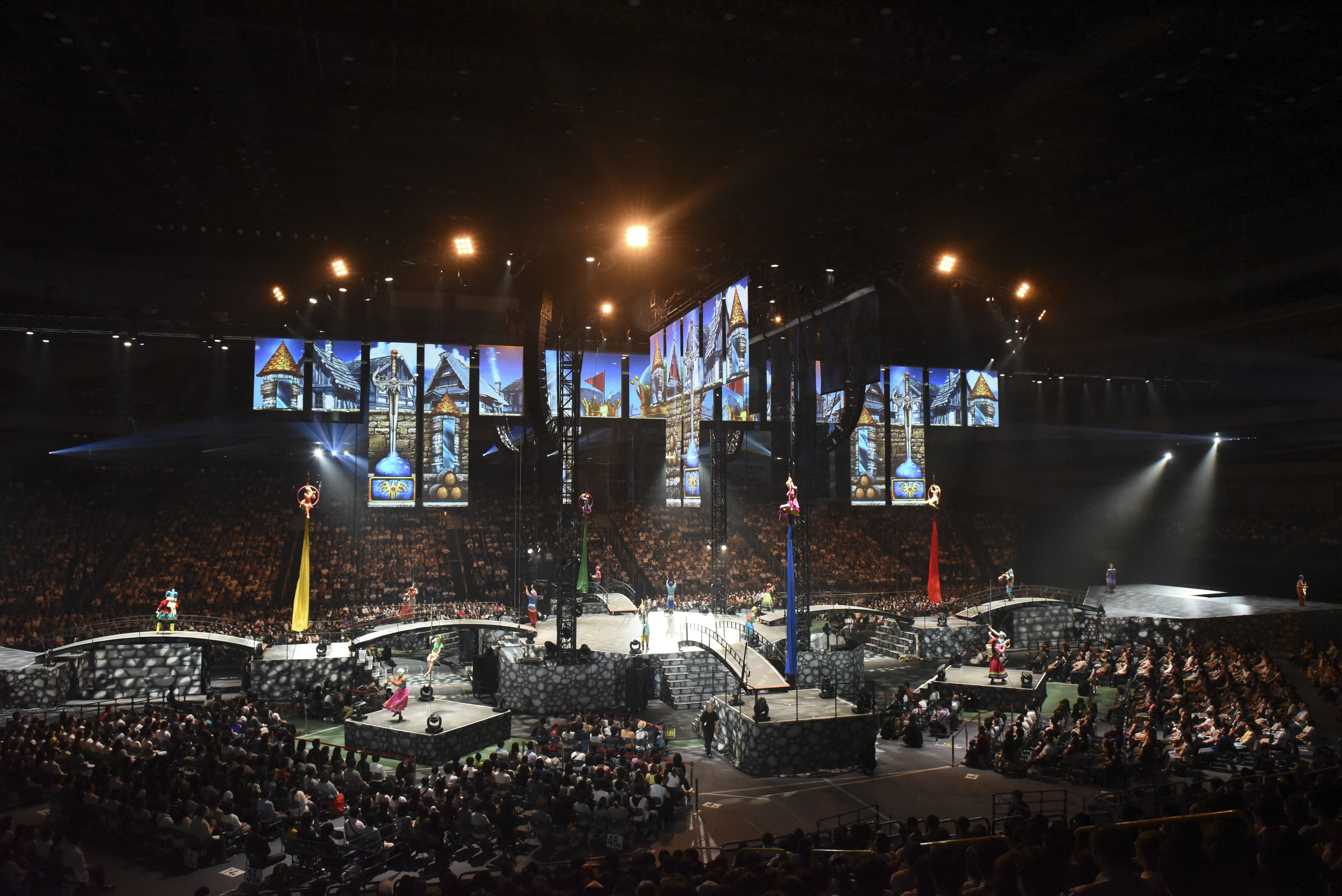 This included eight satellite stages, two larger stages at either end of the arena, and a large performance stage at the centre which acted as the focal point for the performance and the action.

Having so many stages made the show difficult to direct, says Winkler. “When at the theatre, you generally look at one stage and the story unravels in front of you. Here, there was never one single vantage point with which to tell the story from.”

But the island stages were important to fully immerse the audience. The Stufish designers first thought of the formation when moving sugar sachets and milk pots around over breakfast, says Winkler. “We never veered away from that,” he says. “That formulated our first sketches, which went on to be the set.” 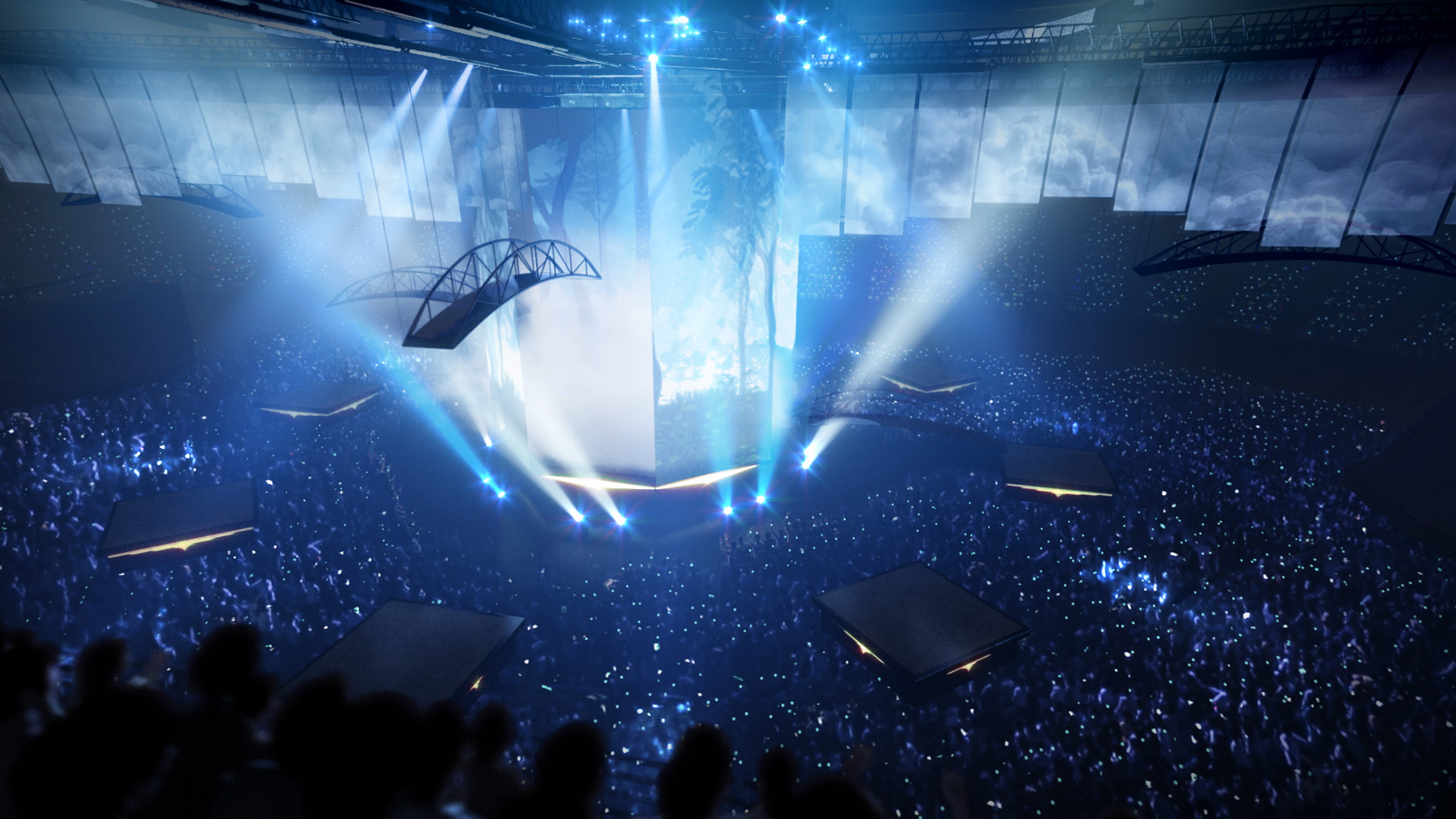 The use of arial bridges and stages allowed for movement, and helped to reinforce the 360° performance space. “It was an ever-changing landscape,” says Winkler.

Projections coupled with clever use of materials such as gauze curtains and lighting also helped to create a more pixelated, digital look to the characters on-stage. The consultancy created a “conceptual bridge” out of two layers of projections, forming a corridor in the middle.

Performers were then harnessed and flown through this corridor of light, which created the illusion that they were digitally rendered and part of a projection seen on a hanging see-through curtain. Coupling these special effects with dramatic, bold costuming and graphic images, helped to immerse the audience within the imagined world, says Winkler.

“People were crying and screaming” 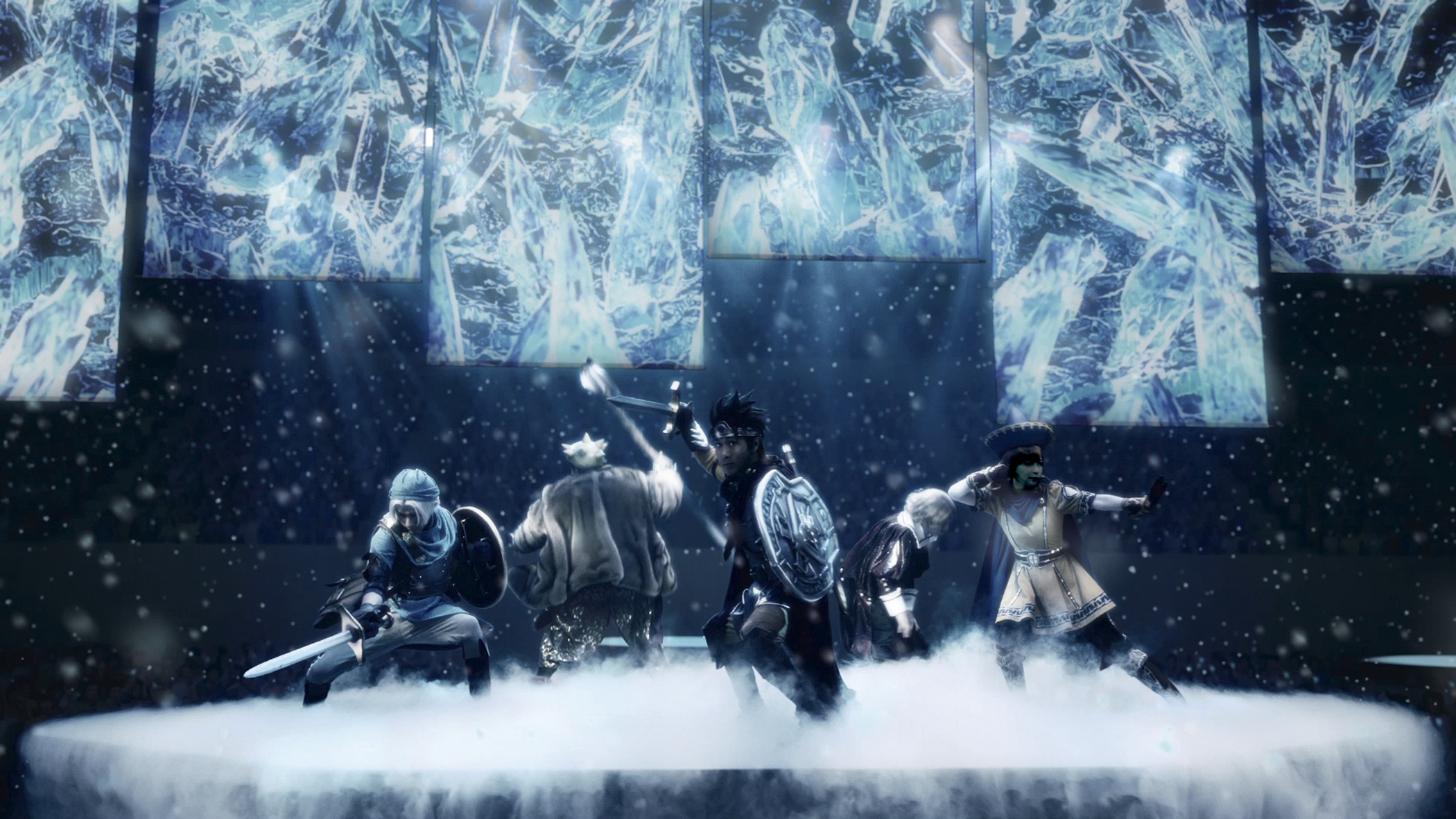 “There was a lot of emotion in the audience,” says Winkler. “Because of the environment, there was extreme audience participation to the point where people were crying and screaming. Of course, these are people who are heavily involved in the fantasy gaming genre anyway.”

While the show is certainly aimed at superfans, creating a large-scale spectacle creates a sense of commercialism and perhaps wider accessibility to an otherwise niche hobby – but to truly understand the narrative, and not just appreciate the special effects, it definitely helps to have played the game.

“The show is very cacophonous,” says Winkler. “Everyone responds to the spectacle – but to understand what it’s about, you have to be in the know with Dragon Quest.”

Making the show true to the game 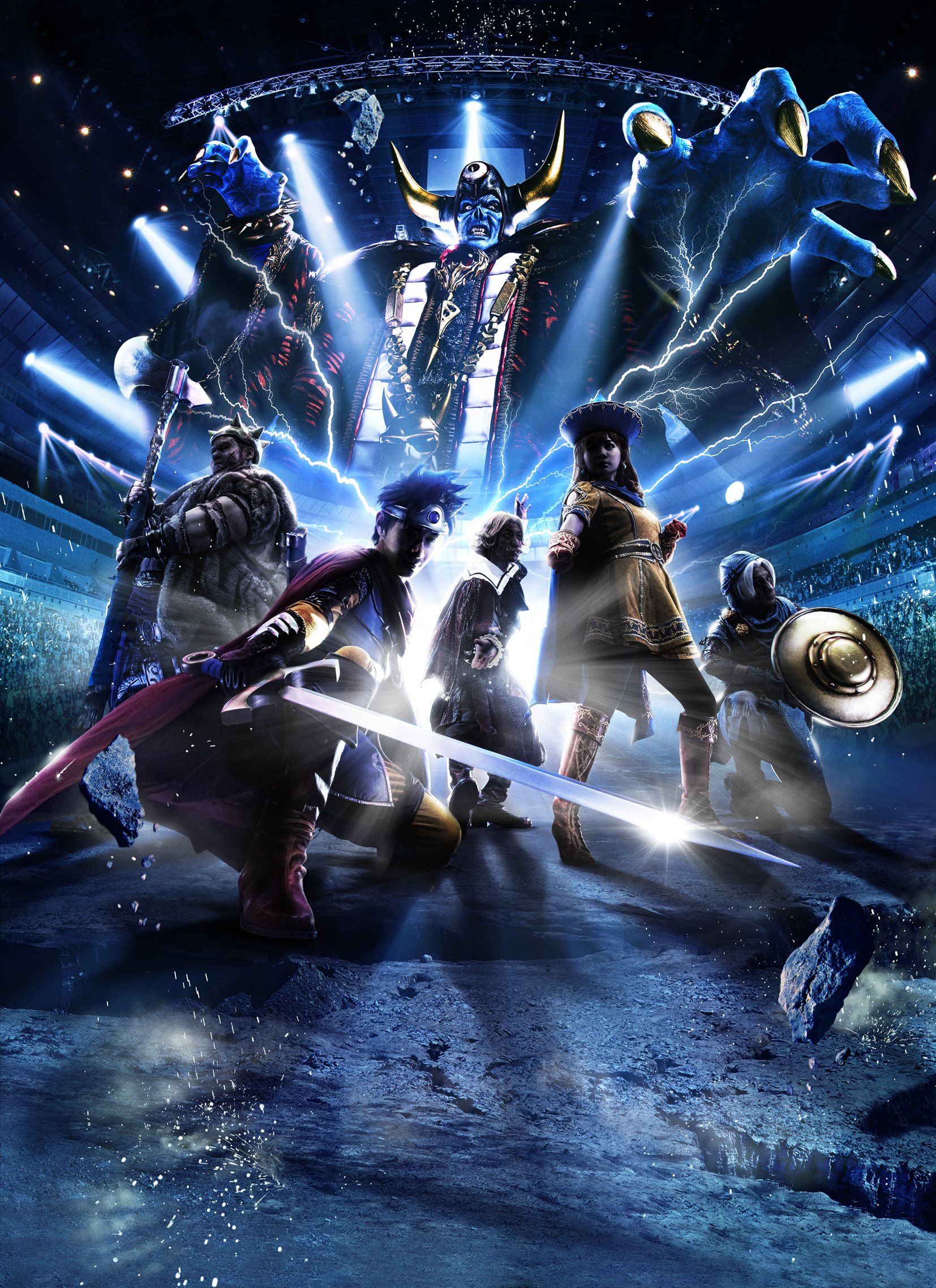 But how do you create a narrative for an open-ended game, the fate of which is ultimately decided by its players? Live show director Kahori Kanaya worked closely with stage writer and the game’s creator Yuji Horii to create a “fixed narrative trajectory”, says Winkler, which “stayed true to the characters” in the game.

“There were quests, battles, low moments and high moments – just like there is the game,” he says. “The characters had the same superpowers and faced the same villains that they do in the game too. It’s about bringing something alive in 3D, which already exists well in 2D.”

“There’s a lot of good will from the audience”

Designing for the stage means that a player’s individual preferences are removed – but in its place, the use of ariel techniques, projections and lighting tricks helps to maintain that feeling of a virtual world, even when sat surrounded by other members of an audience. Ultimately though, for this to work, the audience themselves have to be invested in the first place.

“If someone comes to a show like this, they’re suspending disbelief,” says Winkler. “They believe that what they see in front of them is the Dragon’s Quest. There’s a lot of good will in there – none of what we propose would actually work without that.”

Dragon Quest Live Spectacular premiered at Tokyo’s Saitama Super Arena in July, and is currently touring across Japan until the end of August.