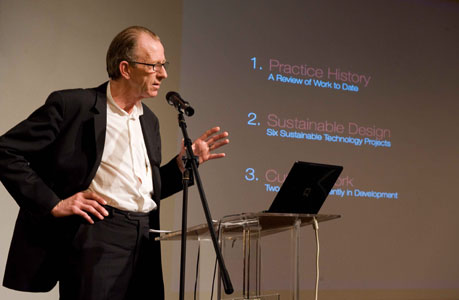 Renowned for successfully merging product, furniture, and environmental design ideas into a single, holistic narrative, Paul Atkinson, who has died at the age of 63, maintained an element of sustainability in almost every project he touched.

Clients varied, ranging from Boots, Concord Lighting and Peugeot to numerous design schools and the United Nations. In each case however, Paul’s signature approach was one of addressing the “whole story”: the technological invention; the business models; the cultural and the personal human context; and – perhaps above all – the aesthetic beauty he always found in the every day objects he created.

Paul could hold a “detail” like few others, ensuring that its ethos was present in every aspect of a project. Testament to that is the significant body of work that he leaves behind.

Paul graduated from the furniture studio at the Royal College of Art in 1980, around about the same time as I was being introduced to the wonders of that amazing design community. Upon graduation, he immediately set about building what was to become Atkinson Design Associates with other family members and close friends from the Leicester area.

With Nick Oakley, Paul joined the teaching team of the Design For Industry programme at the then Newcastle Polytechnic, later Northumbria University. His students included Tim Brown and Jony Ive – and me.

As a teacher, Paul was open, welcoming, and generous (both of spirit and with his time). His conviction that design was the catalyst or the provocateur led to his showing people, ordinary people using ordinary objects, what they could not see, what they were missing as they navigated the “every day”.

Paul showed me what design could be

Paul was the first person who showed me that design could be, and should be, built on a cultural platform of possibility and not merely a technological one or, even worse, one driven by the needs of a sales and marketing team.

Paul was always eager to share the ideas that he himself had explored, culturally, aesthetically and technologically, while a student at the RCA in the late seventies.

I have never forgotten one particular piece, though I confess that to this day I cannot remember for the life of me what it was actually intended to do! But what it was, was very clear indeed. A field of yellow “old fashioned” cast-iron faucet heads, each placed on the top of a 2m-long, half inch copper central heating tube, bent 90º. It was a field of daisies. Whether the tap heads were switches to lamps, coat hooks in a waiting room or an installation for something else I will never know.

A whole new dimension to design

This was the first time I had seen anyone take the formal functional objects of the industrial landscape and re-appropriate them, as found objects, into the informal domestic world. In doing so, they told a new story, about perhaps waiting, hanging around and storing a coat while musing on dreams, and offering the possibility of experiencing the open fields of a Sunday afternoon walk.

This was a whole new dimension to design, one of observing and re-interpreting the world, the idea and its representation, and indeed its communication to me, myself a future designer. It was a revelation. Paul had changed my life forever.

Later, my time at RCA showed me that Paul was part of an emerging community of designers who lived by and through the very same spirit. But, to me, he was always the first.

He aspired to the highest levels

There were of course two Pauls – indeed many Pauls. But in our studio, there were certainly two. I was in Paul’s first cohort of students, and the Paul I encountered was, – while always enthusiastic, and supremely self-assured and confident – a man that gave and asked for nothing in return.

New from his own studies, and starting his consulting business, he fed me wondrous ideas and I devoured all that I could. At the same time, there was a “driven-ness” to Paul, a level of demand (along with a wicked sense of humour), which could torment the less assured. Our studio was like the dragon’s den of today. He aspired to the highest levels of intellectual endeavour in even the most simple of every day objects. And he expected us to have the same aspiration.

Paul’s studio project reviews are today the source of legend, with awestruck students trembling before him. He demanded that the cultural, technological and business aspects of any idea be fully explored and debated, to an extent that is rarely seen and even less rarely permitted these days.

Having spent four years at the Poly, Paul left around 1984. He returned for many years to lead an annual, large in-depth project often reflecting the areas of his own practice. A practice centred on invention, design-led innovation and sustainability and one that above all continually furthered the role of design as a cultural discipline with the ambition to change the world for the better.

Paul Edward Atkinson, 1952-2016, is survived by his wife Judith Mottram, professor and dean of Material at the Royal College of Art.