When it comes to carbon emissions, many have a fairly traditional idea of the worst offenders: cars, planes, fast fashion. It’s less likely that consumers are considering their carbon footprint when they send emails, load homepages or stream YouTube videos.

Our online lives require energy, and those everyday online actions add up. In 2019 it was estimated that digital activity accounts for almost 4% of global greenhouse gas emissions – around the same produced by the aviation sector – and it’s estimated to increase by 9% each year.

“We see mobile phones that are just magically connected to something, and so people can’t grasp it,” Chris Butterworth says. Butterworth is a design technologist and researcher, who founded Aline, which works with clients to reduce their digital carbon footprint. “But as soon as you mention the word ‘electricity’, and the fact that servers and networks need electricity, that’s the pin drop moment for everybody,” he adds. 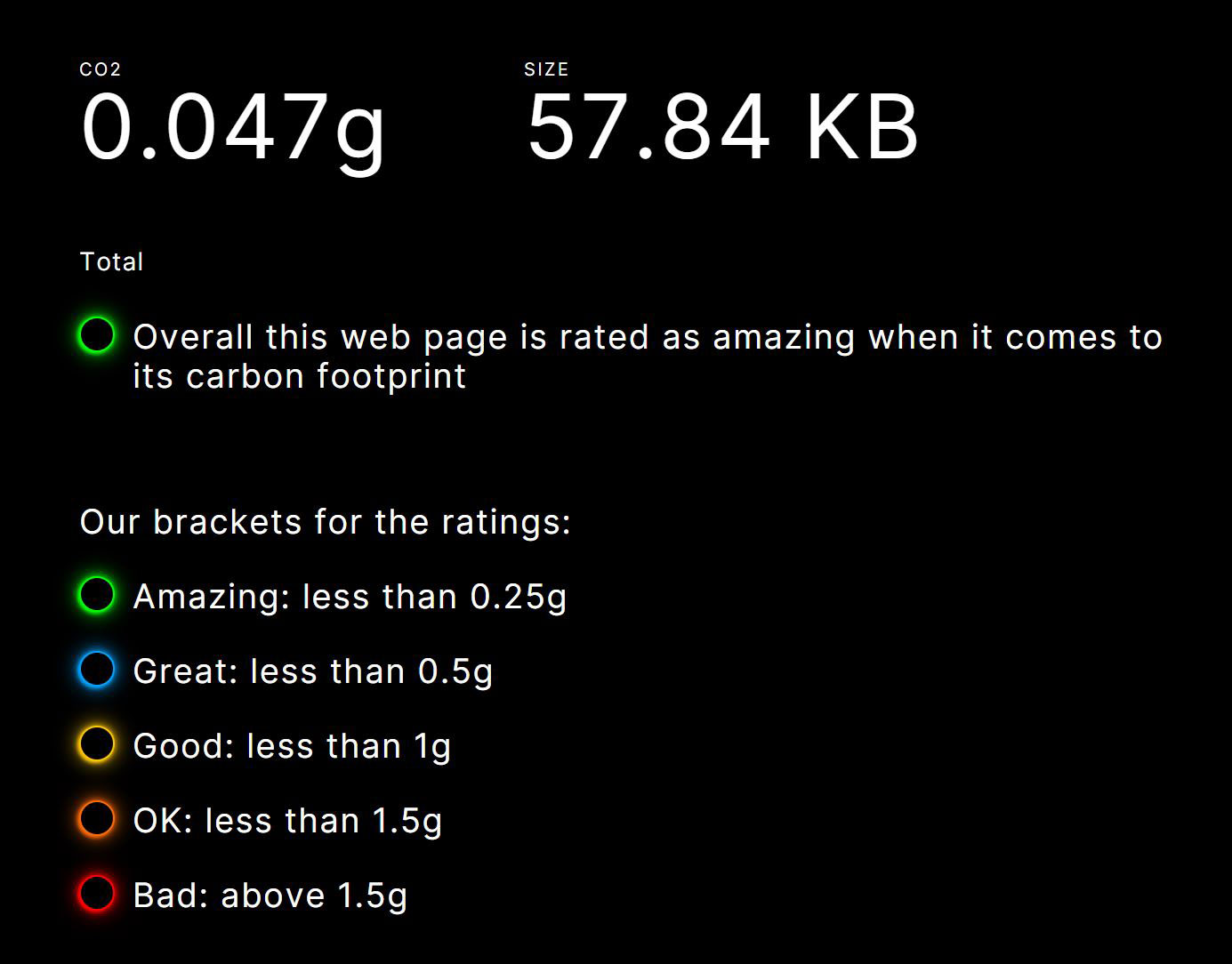 The intangibility of data consumption is the main problem. At a time when many people have just about grasped what the cloud is, it will be hard to learn that cloud storage is also a serious emitter of carbon. In an attempt to address the problem, Butterworth created Beacon, a tool which shows people the footprint of a unique visit to a webpage. It can be added as a widget on pages, and it provides ratings for Co2 emissions. Under 0.25g is ‘amazing’, while over 1.5g is ‘bad’.

In the future, he’s interested in real-world comparisons: how many miles could you power a Tesla with the energy you use up loading websites each day? He adds: “Those numbers need to be quantified as well, to make them easier to understand.”

It’s easy to be overwhelmed by the information. Butterworth explains that he would be calculating how much carbon our interview would emit – it’s a videocall over Zoom – and work out how to offset it by planting trees. A phone call would be an alternative, but that still uses a network powered by a grid. Butterworth is measured about this approach. “If people are more educated with these matters, they make more informed decisions,” he says, helping to avoid extremes. Simple actions – like making a video standard definition not high definition – make a difference.

Designers are paying attention. Climate Designers is a network for those working in the industry to take climate action, while ClimateAction.tech is a Slack group for tech workers who want to “accelerate climate action”. Jason Bradberry, a UK-based designer recently set up Future Selves, a studio which builds “carbon-conscious websites”.

Website design is at a crucial juncture, Bradberry believes. “We’ve come from a place where, for the last ten years, we’ve progressively been able to do more and more,” he says. Now the question he’s asking is: What should we do? His approach is based around the idea of “carbon-conscious” design. One of the most significant steps companies can take in a digital space is choosing a sustainable host; Bradberry points to the Green Web Foundation, which allows you to check if a website is running on renewable energy.

Bradberry highlights some main offenders for websites. Huge image files and high definition videos, for starters. According to research from carbon transition think tank The Shift Project, online video creates 300 million tonnes of Co2 each year – 20% of all digital-based emissions and as much as Spain’s total output. Mobile apps, and their constant updating, consume data too.

This will be a wake-up call for many industries – designers among them, who use studio websites to showcase their work to potential clients. The key will be to show that low-carbon alternatives are not a compromise but a more attractive and intuitive option, according to Bradberry. It also means that other design disciplines can play a role – typography, for example. Text loads in smaller chunks than images, he explains, and could provide exciting opportunities to experiment with type choices.

Bradberry recently worked on the redesign for Becolourful, a brand voice consultancy founded by Emily Penny. The website takes a low-carbon approach, making use of the studio’s brand colours and prioritising text over video-heavy case studies. As writing for design is at the heart of what the studio does, a text-first approach is naturally a good fit anyway. Becolourful’s portfolio is accessible but only starts when you click the play button instead of it automatically loading. A counter at the bottom tells you how much Co2 has been emitted per site load.

Penny explains that this approach was a useful way of thinking about Becolourful’s offering – instead of compiling all the work the studio has ever done, it provided an opportunity to hone in on its services. “Websites can get out of control and become a Wikipedia of everything an agency knows about their discipline,” she says. “But in doing that you lose your big message, the one you want to be remembered for.”

Streamlining content is not only beneficial for the environment but can create a site that’s easier for users, according to Penny. It was also coupled with a realisation about our online habits – “it’s hard to accept that most web visitors will be on your site for a matter of seconds,” Penny says. “It’s usually to get a flavour, if they want to know more, they will get in touch.”

What does the future hold?

In some ways, these pared-back design touches go back to the “roots of communication on the internet”, Bradberry says. But it doesn’t mean they can’t tie into popular trends. Take the case of dark mode, which has become a staple among UX and a regular feature of branding projects over the last few years. It’s difficult to know exactly how much energy the setting actually saves – research suggests it’s most effective for OLED screens in saving battery use – but for many, it’s a preferred aesthetic choice.

Butterworth and Bradberry agree that the priority is education. With COP26 and more nuanced discussions around the climate crisis, that might be possible. But there are challenges ahead. As Bradberry points out, the comparison between digital carbon emissions and aviation is one that might have changed during the pandemic as flights halted and workplaces took to Zoom and other virtual platforms. And as social media platforms attempt to shift to a much-discussed, occasionally-derided metaverse, our data consumption is unlikely to decrease.

One of Butterworth’s guiding principles is a quotation from French writer Antoine de Saint-Exupéry: “Perfection is achieved, not when there is nothing more to add, but when there is nothing left to take away.” For the designer, this exemplifies a simplified approach to digital design – if the key information is there, it’s already “dead perfect”. Then you can begin to negotiate add-ons. As Butterworth frames it: “We talk about reduction in terms of carbon, but let’s change that to reducing your content. That would have the biggest impact.”