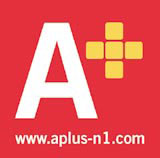 Adventis Group has designed the brand identity for A+, a housing development based in London’s Islington, on the site of the former Angel Primary School.

The work encompassed the creation of a marque, which rolled out last week across brochures, display stands, hoardings and advertising, and is also due to launch on a website, www.aplus-n1.com.

According to Adventis Group designer John Dickinson, the branding’s educational theme plays on the site’s former function. However, he adds that its ‘bright and cheerful’ colour scheme strives to move away from ‘institutional’ associations.

Adventis Group beat two other consultancies to the work, worth a £60 000 fee, in October after an unpaid creative pitch. Dickinson was creative lead on the project.

The Emblem Homes’ development, which is scheduled for completion in mid-2005, will see the Grade II-listed, Victorian school and nearby schoolmaster’s house converted into 38 flats. These will be supplemented by 12 new-build flats and four town houses.