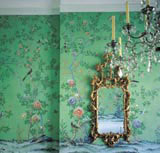 The boundaries between disciplines are becoming ever more blurred. Minimalist John Pawson also designs fruit bowls; sculptor Anish Kapoor has been commissioned to design an underground station in Naples. Now it’s the turn of fashion specialists, who are turning their hands to interior design and architecture.

Matthew Williamson talks me through his latest designs. But rather than the exuberant, eclectic dresses he creates for fashion’s A-list, we’re talking wallpaper, chandeliers and plug sockets as he puts the finishing touches to his first standalone store (DW 18 March).

Opening this month in London’s Bruton Street, on the site of a listed former gallery, the store is not the creation of some big name architect. Instead, Williamson, who wasn’t willing to entrust his showcase to anyone else, has taken on the challenge himself. This is not such an unlikely idea; his Primrose Hill home is a gloriously colourful, ethnic-chic concoction and he already has one shop design under his belt – a jeweller in Westbourne Grove.

‘I do have a passion for interior space – it’s a hobby,’ he says. ‘I was adamant that I’d design [the store] myself. I wanted it to be my project. With such large amounts of money involved I’ve been quite protective.’

Another factor was a disappointing experience with graphic designers. This gave Williamson further ‘validity in being a control freak’ over the interior, although he’s now happily teamed up with Sea for the store’s graphic collateral. And while he brought in his creative director Clare Ceprynski to work alongside him on the design, he’s happy to take responsibility for the outcome.

The two worked well together, with Ceprynski helping Williamson to realise his personal tastes spatially.

‘My weaknesses are Clare’s strengths – she’s talented in terms of space and has more of a knowledge of architecture,’ he says.

Their ‘virtual nature’ store concept embodies Williamson’s interest in fusing the aged and lived-in with the ultra modern. The result, he hopes, will be a timeless, natural look with a ‘layer of synthetic dusting and special effects’, including customised luxury wallpaper, diamantÃ© adornments and a fake tropical garden. These are touches, surely, that only a fashion designer could provide. ‘It’s eclectic, definitely quite a playful store – like the clothing it has an exotic touch to it,’ he admits.

The outside of the store is emblazoned with Williamson’s name in his signature fuschia pink Perspex. Inside, the formal wall panelling is retained, and combined with a creamy marble floor and Perspex shelving. A typically quirky feature is the three ‘caryatids’ modelling outfits, each consisting of a 1920s Murano glass chandelier for the head, with a suspended mannequin above a white Perspex light box showing the shoes.

The key feature in the shop is the indoor garden near the fitting rooms. It is housed in glass tanks, uplit at night to appear as if it is floating and surrounded by hand-painted chinoiserie wallpaper by De Gournay. Williamson is customising this in situ with fluorescent ink to give the walls a neither-old-nor-new appearance, and embellishing it with jewels and crystals set into the beaks of the birds. The tanks are inset to accommodate comfortable seating to give those waiting the feeling of being immersed in the lush-but-fake landscape. Other twists are the smashed Venetian glass mirrors, adorned with diamantÃ© spider brooches – Williamson and his team collected 60 pieces from markets and specialist dealers – and a collage of images of inspiring figures, from Elvis to Keels – along the corridor leading to the customer toilets.

Throw in brightly-coloured lacquered metal rails, and a painted Indian cabinet and comfy armchair from Williamson’s own home, and you start to develop an idea of the store’s diverse, mix-and-match personality.

Williamson admits the store has been a labour of love, a demand on his time and a budgetary challenge, but it’s also been fun. ‘I love it,’ he says, and hopes to be able to add further outlets in the future.

He is not the only high-profile fashion designer working outside his traditional remit. Welsh-Japanese husband and wife team Mark Eley and Wakako Kishimoto apply their distinctive patterns to shoes, bags and – more recently – sofas. But their move this year towards experimenting with printed building surfaces signals a significant change in scale.

Eley Kishimoto’s partner in this venture is architect 6A, designer of the award-winning Oki-Ni boutique on London’s Savile Row. The idea is to use Eley Kishimoto’s patterns on a grand urban scale by printing directly on to the building fabric as part of architectural and urban design schemes. This approach ties in with a broader trend towards a re-examination of pattern and ornament in architecture, led by practices such as Herzog & de Meuron.

6A’s first work for Eley Kishimoto was at the group’s latest London show, where it printed the designers’ patterns directly on to the surface of the catwalk. It is developing this further at the forthcoming Fashion at Belsay exhibition at Belsay Hall in Northumberland. 6A intends to create a maze-like cityscape in the Old Drawing Room by combining Eley Kishimoto’s exquisite patterns with down-to-earth building materials.

‘We’re playing with the scale of pattern and how that disrupts a certain reading of the space and objects,’ says 6A director Tom Emerson. He took inspiration from the Belsay gardens, especially the site where the stone for the hall was quarried and where the remaining stones are mossy and rust-red from the iron deposits. Using cement board, 6A has created selected Eley Kishimoto patterns in rust with iron filings and is even experimenting with growing moss in patterns by printing the board with sealants and retardants to form the design. The rest is brushed with milk and other substances to encourage the moss to take hold. These are then mixed with other boards, where the pattern is screen-printed more conventionally.

6A and Eley Kishimoto are particularly interested in the potential of pattern to regenerate 1960s tower blocks by giving them a second skin, whether using direct print on concrete board or encouraging organic surface growth to form the pattern. This use of pattern – traditionally applied inside – could, according to 6A director Stephanie MacDonald, be useful in creating urban identity. ‘Public space can be more temporary and less neutral,’ she explains.

The two groups’ first collaborative work is a retreat for creatives near Bordeaux in France, called The House at Hautefage. They are creating a patterned pavilion from printed plywood and concrete board in the garden. Internally, Eley Kishimoto is providing soft furnishings and a 15m-long expanse of richly patterned wallpaper. There’s even the possibility of printing on the chairs, towels and mattresses.

If time permits and it can find urban-scale applications for its work, Eley Kishimoto would love to increase its involvement in the spatial aspects of design as well as the surface. The group is invigorated by the prospect of its pattern shaping public space.

‘It’s a new area of application for Eley Kishimoto’s philosophy,’ says Eley. ‘Fundamentally, it’s very simple, but the opportunities are enormous if people take to it.’

Fashion at Belsay runs from 29 May to 30 September at Belsay Hall, Northumberland. For more details, visit www.english-heritage.org.uk

Graphics need context to come off the page