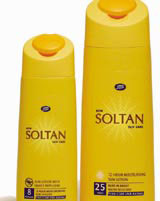 Priestman Goode and the former Trickett & Webb have collaborated on packaging for Boots the Chemists’ suntan lotion brand Soltan, which launches this week.

Boots is investing in the range in a bid to increase market share. In addition to packaging, the product itself has recently been upgraded to deliver higher cover – it now guarantees five-star UVA protection.

According to Priestman Goode senior designer David Hamilton, the consultancy was briefed to modernise the shape of the packs and also communicate value for money messages.

‘We didn’t want it to be too aggressive, we’re trying to give the products the feeling of a family holiday and give mothers confidence in its protection capabilities,’ he explains.

The consultancy has chamfered the top of the bottle to reveal a circular form, which, according to Hamilton, is ‘a subtle reference towards the shape of the sun’, while the Soltan logo ‘gives clear, confident messages about the brand and its product’, he adds.

The outer packaging has a matt plastic finish to offer softness, he adds. The new shape also delivers greater stability on shelf.

Webb and Webb creative director Brian Webb, who worked on the project at Trickett & Webb with joint creative director Lyn Trickett, says the consultancy was briefed to deliver more coherence to graphics across the Soltan range, which had become inconsistent over time.

It was also important to balance protection messages with more cosmetic-led cues, he says.

The two London consultancies began working on the project more than 18 months ago and completed designs early last year.