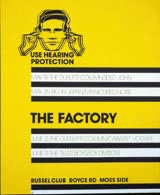 ‘A logo or identity won’t make a significant difference. It’s a much bigger opportunity,’ says Frost.

Dave Palmer, creative director of local group Love, agrees. ‘The city’s image isn’t going to be solved merely by designing a new logo and choosing a nice typeface,’ he says.

He advocates ‘bold, radical approaches to architectural, environmental and cultural decisions that will create the foundations for the international brand Manchester wants to be’, and cites Bilbao and Barcelona as ‘examples of where architecture and the environment have been prioritised to international acclaim’.

But, he adds, Saville will be able to measure his success on the faces of the people who live in the city, and says improving Manchester’s ‘woeful’ public green spaces by commissioning a large scale urban park, would be a useful first step.

‘To some this would be a profligate use of prime real estate, but it’s an example of how and why the council and Saville need to be brave,’ he maintains. And making sure the council is on side and willing to be brave is key for Saville to achieve his aims, adds Palmer.

‘Politics, quangos and committees are synonymous with the strangulation of good ideas and their implementation. If Saville is to achieve anything he needs to be afforded autonomy, trust and encouragement.’

AIG creative director Tim Fendley agrees that winning over the local population is vital. He believes Saville needs to deliver a tangible, noticeable change, and quickly.

‘[Saville] needs to look for an area where he can make a difference. It’s important he makes an immediate impact on the ground,’ says Fendley.

‘The challenge will be finding a way to deliver a visible representation of his ideas, making it physical so people can understand it and it talks to them. Some people will love it and some hate it. The important thing is for Saville to be confident, stick to his guns, follow through the idea and create something long lasting,’ he adds.

Saville himself is taking a big picture approach. ‘Do something worth talking about and people will talk about it,’ he says.

He is also aware of the challenges he faces, describing his approach to the project as ‘honest and realistic’ and says he has taken up the opportunity largely because Manchester is his home town.

‘I had a sceptical stance regarding the vetting board and the notion of [the role], but now I’m excited about the possibilities. It’s my home town. I had to do it,’ he explains.

City councils, designers and disenchanted residents across Britain will be watching to see if Saville can deliver a touch of his Factory magic to the fabric of Manchester, and restore it to top dog in the North West.