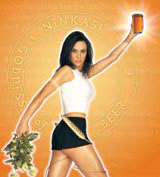 The Campaign for Real Ale is launching the next phase of its campaign to promote beer to young men and women this week. Storm Design has created a poster, unveiled at the Great British Beer Festival, which pictures a ‘powerful, iconic’ image of a woman – the Goddess of beer, Ninkasi, says Camra marketing manager Louise Ashworth. The work follows last year’s 100% Naturale campaign featuring attractive male and female models clad only in hops.