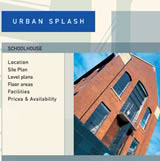 I-D Media has completed a £70 000 website for Manchester-based regeneration specialist Urban Splash, known for its commercial and residential property developments across the North West.

The site, www.urbansplash. co.uk, features layered, semi-transparent images and carousel photographs that change slowly to show different parts of the properties for sale.

Urban Splash director Nick Johnson says the previous site, created by Enzyme, was designed ‘before we realised the potential of the Internet’ and the brief to I-D Media was to make it ‘more dynamic’. Around 30 per cent of enquiries currently go through the site and the aim is to increase this to 50 per cent, he says.

Johnson adds, ‘It’s a massive site, because we have buildings that are genuinely photogenic and wanted [to reflect this]. The essential thing for me was that it would take no more than three clicks to get the essential information.’

Elizabeth Morrissey, I-D Media’s head of design, led the project creatively. She says, ‘One of the things that struck me was that when you see [Urban Splash’s] properties they are quite imaginative with space and we were concerned to put that into its website, which is why we used layering to get depth.’

Another facet of the brief was to make it easy for the company to add details and pictures of new properties regularly.

The consultancy was appointed after a competitive pitch last year (DW 6 December 2001).