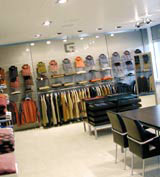 In a shop, the product is hero. That’s the mantra Marc Ten Bruggen Cate, managing director of the consultancy DJPA Partnership, drums into his designers when they’re handed the task of taking that ethereal entity ‘the brand’ and giving it four walls, a floor, a ceiling and a big sign saying ‘come in and buy something’.

Too often in the past decade, Ten Bruggen Cate says, brands were content to make a big splash with a new store and ignore its profit and loss statement for the next five years.

Retailers Espree and Mexx both wowed the crowds, but their shop designs didn’t sell the necessary volumes, he claims. The product wasn’t the hero, it was cast in the supporting role to design’s overblown ego.

‘If you’ve got a store with a great image, and you get a thousand people through because it looks so good but they don’t purchase anything, you don’t have a store you have a museum,’ Ten Bruggen Cate says.

DJPA is designing interiors for Dutch menswear retailer Gentiluomo, which is seeking a site in London’s Bond Street. Gentiluomo is one of the latest crop of brands, among them fashion manufacturer Pringle and on-line wedding resource Confetti, which have just opened shops or are looking to develop retail environments (DW 1 August and DW 25 July).

For Ten Bruggen Cate, any brand that opens a store must stick to the same immutable retail laws that govern ‘how you sell Heinz Baked Beans’ – traffic, purchase, repeat. In other words, impressive design statements are all well and good, but they have to be underpinned by effective marketing.

‘When you walk into Gentiluomo, I want you to purchase at least three items,’ he says. ‘And [the design concept] will be successful if after three years [Gentiluomo] has 25-30 stores or shops-in-shops because it has shown potential retail partners it has a profitable offer. Why should anyone pick it up? Because you can show revenue, not because it’s your friend.’

Great design has an important role to play in making a store profitable as long as it is focused on the brand. This is easier to achieve, designers say, if you’ve been involved in creating the brand in the first place. This was the case with the first-ever Confetti store, designed by Coley Porter Bell, that opened on London’s Tottenham Court Road last week.

Translating a 2D identity into 3D reality is more straightforward when there are elements that naturally suggest physical icons. The Confetti logo is made up of pastel petals, which were the ideal signature theme for the store. They’ve been used as signage inside and out, as well as forming the spectacular centrepiece mobile, says CPB creative director Stephen Bell.

‘It adds atmosphere, but also leads people downstairs,’ Bell says of the mobile, emphasising the design’s dual function of making a visual impact, but also contributing to customer flow and dealing with the vital issue of getting people to move between floors.

Bell also notes that the mobile is successful because it reflects the brand’s core values.

‘It comes from the personality of the brand in the first place. Confetti is about joyful occasions, celebrations, and [this] is something that feels in keeping with that,’ he says. Conversely, although Confetti’s website features photographs because it is a virtual store, the shop doesn’t because it wanted to steer clear of clichÃ©d images of weddings, he suggests.

Shop designs that don’t reflect the brand’s core values are likely to come a cropper, according to Bell. He cites Virgin V – Virgin’s attempt to stretch its brand to cosmetics – as an example of shop design being out of kilter with the brand values.

The flagship shop had features such as water running under the floor, but the luxury design positioning contrasted badly with the merchandise, he feels.

‘It had some quite interesting things going on that looked up-market, but the products weren’t up-market. What is the brand all about? I don’t think it had sorted it out,’ Bell says.

Shop design needn’t be as tightly woven into a brand’s existing iconography as the Confetti example, though. Wells Mackereth Architects partner Sally Mackereth discussed a wide range of ideas and sources for visual clues – including installations by artist Andy Goldsworthy – with Pringle before embarking on the design of its Bond Street flagship.

Mackereth picked up on the Pringle strapline ‘Be materialistic’, which communicated something of the humour of the brand, as well as pointing her designs in the direction of tactile materials.

Portland stone and water buffalo hide will bring the interior to life, but will also give individual character to different areas of the shop. The aim is to be intriguing enough to draw customers from one section to the next, she says.

For brands in expansive mood, the advantage of opening a store is that it can evaluate the response of customers within a season. But designers must guard against grandstanding concepts that fall apart on the ground.