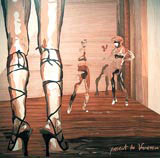 Artist Richard Waring, once curator at Hoxton’s Blue Note Gallery, but now based in Derby, returns to the capital for his first solo exhibition next week.

The New York Times described her work as ‘vaguely similar women wearing underwear, high heels – and not much else’. The show blends Waring’s fashion, design and fine art influences on a range of wall-mounted 3D works that fuse acrylic, wood veneers and powdered glass.

‘I love Vanessa’s work so I’ve made some presents for her,’ he says. The exhibition is at Dust, 27 Clerkenwell Road, London EC1 from 8 August to 3 September.