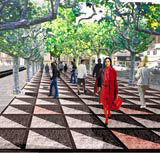 LDA Urban Design will present a masterplan to Torbay Council next week for extensive redevelopment of the Torquay harbour area. Local officials hope to rival the French Riviera as a glamorous waterfront destination within the next three years.

The Exeter-based group is understood to have received a £50 000 fee for conceptual and consultative work. The budget for the ‘public realm’ project is £7m-£10m.

The brief is to create ‘a world class waterfront’, says LDA project manager Fraser Osmond. ‘Torbay needs to announce to the world that it’s changing and putting itself on the map.’

The centrepiece is a wide pedestrianised area, called The Strand, which runs alongside the top of the harbour area. The tree-lined boulevard will reclaim 4-5m of walking space from existing road lanes and features black limestone seats.

‘We get the feeling that this could be an incredibly rich space. We’re trying to get a Mediterranean feel, playing on that Riviera theme,’ says Osmond.

He also reveals LDA is in talks with an unnamed Turner Prize-winning artist for an installation on one of the harbour piers.

The group hopes to be retained for the detailed design stage and is looking for bespoke lighting and possibly some furniture design input.

In a related project, O’Leary Prescott is working on identity, content and exhibition designs for the £7.5m Living Coasts marine aviary, being run by Paignton Zoo and scheduled to open in Torquay next April (DW 1 March).