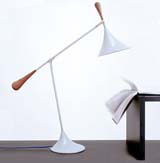 Terence Conran’s latest lighting collection, Light by Conran, hits the high street this month (DW 1 December). The distinctive products, made in collaboration with Home-Deq and featuring a graphic identity and packaging design also by Conran & Partners, all clearly point to its creator.

Yet copying within the lighting sector remains a notorious problem and, with current intellectual property and copyright laws considered by many to be unclear, designers are often left vulnerable to the pitfalls of not only intellectual theft, but also the process of registering designs in the first place.

A recent court case between Urbis Lighting, supplier of exterior lighting, and Woodhouse, specialist in the design and manufacture of street furniture and lighting, shows up many of the problem areas.

Woodhouse alleged that Urbis’ Polo lantern was a copy of its street light, Geo Disc. Both designs are characterised by a smooth flying-saucer shape. Following a design registration trial, held at the Patents County Court in London, Urbis and its subsidiary, Aquila Design, agreed to pay damages, including royalties based on any future sales.

Under the court spotlight, however, attention was drawn to Woodhouse’s design registrations, revealing that its initial Geo Disc light design was filed in the name of Lifschutz Davidson, the architect that had developed the concept in collaboration with Woodhouse. This resulted in the judge ruling that the registration was invalid, meaning Woodhouse can not prevent other companies from making copies of the light under licence.

‘In general, the industry does not look closely enough at the details of design rights, and there is potentially a raft of complexities to invalidate the design registration. It is very important to pay attention to details, so there are no loopholes for people to walk through,’ says Peter Wear, managing director at Woodhouse. He believes going to court, which can be lengthy, complicated and expensive, is vital to ‘force home your rights, if you feel they have been infringed.’ Copying within the light sector is particularly rife, due to the low cost in developing products.

Anti Copying In Design, the trade organisation committed to fighting design piracy, recognises the minefield of issues surrounding copyright and is embarking on a series of initiatives to help resolve the dilemma.

It is currently trialling a new document that sets out a framework of licence product agreements, providing a ‘working tool’ for designers, so they can negotiate licence fees and royalties. Dids Macdonald, Acid’s chief executive, says response from the industry has so far been positive.

Acid is also gearing up to launch its first intellectual property insurance scheme early next year, providing a cost-effective system for designers, which covers up to £100 000 in legal fees.

‘If people will copy, they have to be aware of the consequences. Going to court sends out a strong message,’ says Macdonald.