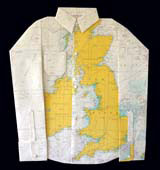 Fasciolariidae, part of the series Les Robes Géographiques by designer Elisabeth Lecourt, was exhibited at Nabs Art Show at The Old Truman Brewery in London this month. (Pictured left)

Abuse of the Public Domain is a show of networked media art by Stanza, featuring video projections of CCTV footage from London and New York. It is running at the HTTP Gallery in London N4 from 9 December to 23 January 2006. 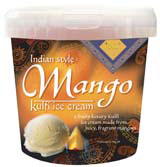 New York-based sound artist and composer, Paul Geluso, has created a site-specific multichannel sound installation at Space studios in Hackney, London. It will be installed until 7 January 2006.

Nucleus is the new café at Queen Mary, University of London, designed by Lief Design.

Parker Williams has designed the packaging for an Indian-style ice cream being launched by Royal.

Before the Shutters Come Down, published by Vomit in the Mainstream, has been designed by Karina Nielsen using drawings by Camilla Jessen.