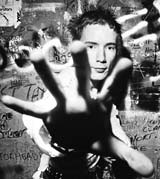 Celebrating a truly unique career, which has spanned 30 years and coincided with some of the most momentous events in the history of popular music, photographer Dennis Morris is showing a series of unpublished images that’ll rock any (past or present) punk’s world.

A regular contributor to the world’s music press and style magazines, and creator of many seminal album covers, Morris began shooting his musical heroes as a teenager. An image-making prodigy, with a Bob Marley tour already under his belt, he was asked by reggae fan John Lydon (AKA Johnny Rotten of the already infamous Sex Pistols) to accompany the band on its headline-grabbing UK tour, circa 1977.

With outraged editorials in the red tops, tabloid TV ‘investigating’ the strange antics of fans and furious protesters alike, and local authorities prompted to ban the actual gigs (in the belief that the country’s youth was on the brink of ‘revolting’), they were turbulent times indeed. The same age as his fêted/demonised subjects, Morris gained their trust, earning unrestricted access, front and back stage.

Candid, intimate, humorous and heroic, these images set new standards for capturing the magic of rock and roll; and show a much-discussed band of individuals in a new, true light.