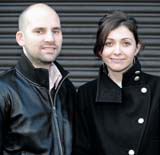 Blacksheep has the courage to stand out from the herd, and has a flock of opulent, high profile interior design projects. Yet, despite its success, it maintains a strong, hands-on DIY ethic, says Bethan Ryder

For an interior design company that’s barely three years old, Blacksheep already has an impressive portfolio of high calibre clients/ from the Mazzilli fashionista clan behind the Voyage label, to French luxury goods brand Hermès; from corporate conglomerate Diageo to the movers and shakers of London nightlife. The creative hub of the six-strong studio team is husband and wife duo Tim Mutton, 34, and Jo Sampson, 32 (pictured).

The group’s latest creation – the Cuckoo Club – has just opened, and has been welcomed as one of the sexiest new arrivals on the London party scene in quite a while. Arriving at the club a few days before the glitzy, star-studded opening, Sampson was to be found balanced, precariously, on a scaffolding platform in a soaring double-height stairwell, meticulously attaching crystal droplets to a giant glitterball, suspended from a gargantuan lampshade. A similar hands-on approach characterised Blacksheep’s first major project – the Voyage boutique on Conduit Street. Sampson was in her party frock, ferociously stabbing the plaster walls, to achieve the desired distressed look, only ten minutes before the opening party.

‘We do have a tendency to throw ourselves into things,’ admits Mutton. ‘It’s sink or swim. Every project is done inside out and outside in – we don’t just do the frilly bits.’ A clear testament to this is the Cuckoo Club, a £850 000-plus transformation of two notorious old London venues – the old Stork Rooms and pole-dancing joint Crazy Horse on Swallow Street – into an opulent and exclusive two-tier club for Jamie Lorenz and Bo Bendtsen.

The finished product is richly grand, but with a funky edge, which was the idea. ‘We took inspiration from Regent Street, so there are traditional elements, with a modern spin,’ explains Sampson. ‘It’s about mixing old and new, from the old-fashioned, tall, dark timber doors, to the ground floor supper club that we’ve glazed with pink glass.’

In passionate stereo, Mutton likens the LED coloured-lighting ceiling panel – custom-made by lighting consultant Into Lighting – to a ‘graphic equaliser’, whereas Sampson references ‘fairground lights’. Yet, as a working team, they rarely argue. ‘We may have different opinions, but we respect each other’s ideas and know where to draw the line,’ says Sampson.

Most projects are joint efforts, aside from the residential schemes – which include a refurbishment of Bo Bendtsen’s apartment, created by Yoo (co-founded by Philippe Starck) – which have so far been Sampson’s domain.

The two met when Sampson left Imagination and joined United Designers. They both decided to leave in 2002, intending to travel and work in the US, but the depressed, post-9/11 market prompted them to stay at home and form their own studio. 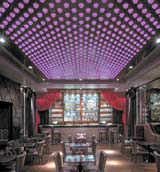 The company name was inspired, partly, by Mutton’s surname, but is also indicative of their company philosophy. ‘It’s a bit of a joke really. We’ve often found it frustrating, fitting into a particular house style. More than that, though, we never want to take ourselves too seriously, even as designers,’ he says.

It’s been as much about who they know, swiftly followed by what they know, that’s led to Blacksheep’s introductions to clients such as the Mazzillis and Hermès. At Voyage, Blacksheep created an innovative clothing display system, based on a theatre track, that allowed the punky retailers to suspend their designer clothes like psychedelic artworks. The commission for Hermès’s London headquarters arose out of a similarly innovative solution. ‘There was an outside area that competing architecture firms had not incorporated,’ explains Mutton. ‘For us, it was integral to the scheme – we wanted to make a fantastic garden, to be used for events, and Hermès thought it was a great idea.’

In the New Year, Blacksheep is moving to larger offices to accommodate its expanding team, and future projects include two residential schemes. It has also got its eye on a hotel scheme and other projects in Russia, China and India. Judging by Blacksheep’s progress so far, it would appear that straying from the flock is a sure-fire recipe for success.