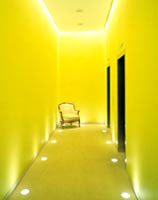 When Arnold Chan set up Isometrix 16 years ago, nobody knew what a lighting designer was, or what they did. Now clients will go to Isometrix first to secure their lighting scheme, then consult Chan as to which designer he thinks would be suitable. It’s a state of affairs which Chan clearly relishes (who wouldn’t), but he also finds it a little odd.

It probably has something to do with the fact that Isometrix has a reputation for working with the crÃ¨me de la crÃ¨me of design talent and skimming the creamiest projects from the pot. You probably won’t find the group designing technical schemes for museums or shopping centres, but name the most fashionable restaurants, boutique hotels and designer stores in London, New York or Paris and you can be sure Isometrix had a hand in the lighting scheme.

“People don’t come to us purely for our engineering skills,” says Chan, “We’re best known for our ability to create mood and atmosphere. For me, it’s not about calculating lux levels necessarily, but how you feel when you go into a space. It’s the emotion of light that we try to capture,” he adds. Would Ian Schrager’s hotels have had the same dramatic impact and runaway success if they had not been lit with such theatrical flair? Would the plain, white entrance hall of St Martin’s Lane have such personality without the whimsical primrose yellow lighting? Would its resident’s bar have simmered with such mysterious possibility were it not for the low lighting and richly glowing ceiling voids? I think not.

It is this golden touch, the magical enhancement of a good design, that has surely made Isometrix the most well-connected lighting firm on the planet. Mention the most sought after architect or designer of the day, and you can be sure Chan will have been shaking hands with them over a design well done at some time or other. “Not that we’re here to collect names,” says Chan. “It’s just that we’ve had the opportunity to work with some fantastic people.”

Some say that opportunities are made and not given, and in Chan’s case it may be true. Right from the beginning he had a high-profile project list, working with Norman Foster and Richard Rogers when their offices were still mere studios. “I’ve always believed from day one that I should strive to work with the best people,” says Chan. “It might take longer to get establ

ished, but if you start from the top, then you can always work down. Working your way up from the bottom is more difficult.”

Chan believes that the most opinionated designers are the easiest to work with. “Designers who are more insecure about their abilities are more set in their ideas, you can’t touch this or change that. Then it becomes frustrating because you can only do so much,” he explains. It probably helps that Chan can talk to architects on their own terms, having studied at the Architectural Association himself.

He moved into lighting by accident while working as a freelance for Italian lighting manufacturer iGuzzini, designing its showrooms. In order to try and understand how a technical showroom worked, he had to understand the effects that each light produced, and so took a course in lighting engineering. “Learning how to calculate light levels doesn’t teach you how to design a lighting scheme,” says Chan. “But combining it with my knowledge of architectural spaces – that’s lighting design.”

It was Chan’s chameleon ability to understand what the client or designer is trying to achieve and literally put their work in the spotlight that has made him so successful. “Every designer works in a different way – Antonio Citterio, because he is so brilliant at product design, works from the product out. He wants to know the size of the light fitting to the millimetre. With Philippe Starck it’s all about theatricality; with Christian Liaigre it’s about being chic and elegant. Every designer has a different way, and it’s my job to know it,” says Chan.

Indeed, the theatricality of Starck is very different to the minimalism of the likes of John Pawson and David Chipperfield, yet Isometrix bridges the divide between the different styles. In a very architectural white space, it’s the light and shadows that lend depth and character to a room and prevent it being too austere or simply dull. In such spaces, technical lighting equipment would be highly intrusive, but one of Isometrix’s tricks is to always conceal the source of light out of respect for the architecture. “We don’t like showing light fixtures everywhere,” Chan explains. “We’d much rather be discreet about it so that people notice the effect, or even just experience the feel of the light.”

In the perfume hall at Selfridges, for instance, designed by Liaigre, “We tried to organise the ceiling so that the lights didn’t become an afterthought. In many department stores there are millions of lights everywhere,” Chan explains. “We kept them within slots in the ceiling and lit the columns so that they are very dramatic within the space.”

On one level, the lighting is very architectural, to unify the room and prevent it becoming too broken-up by all the different concessions stands. However, another principle of the consultancy is to layer the light to give a sense of richness. Hanging pendants were also introduced into the perfume hall to give gentle pools of light and prevent the glare that can be a feature of these predominantly white spaces. After the refurbishment, the perfume hall doubled its turnover practically overnight.

And it’s not just the designers; clients love Isometrix, too. Selfridges is one of those projects where Isometrix is involved in every aspect of the refurbishment, from the external faÃ§ade of the building to its in-house technology themed restaurant. “Keeping the same lighting consultant helps to retain the overall feel,” explains Chan. He is also designing the lighting concept for Hakkasan, Alan Yau’s new Chinese restaurant.

Besides lighting schemes, Isometrix has been getting involved in the product design side of lighting recently. The firm has always had a product development team for custom fixtures, but eventually they hit upon one that was just too good to keep to themselves.

The Colourwash system evolved from the lighting systems in the bedrooms at St Martin’s Lane, whereby visitors can saturate their white walls with different coloured light on a whim. They refined the design for retail, and now everyone has the option to match their environment to their mood at the turn of a dial, or to set the system to scroll through colours at different times of the day. Trust Chan to know what we really want from lighting, but then, as he says, that’s his job.