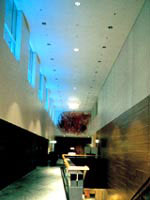 Maurice Brill has a theatre lighting design background, but transferred his skills to architectural lighting when he founded MBLD in 1972. The MBLD team hails from theatre, interior, product design and architecture and it is this contrasting experience that allows MBLD to push the frontiers of lighting to create some truly original and exciting environments.

MBLD’s work spans a number of fields, such as shopping centres, galleries, landscaping and architecture and it has worked all over the world, from the Far East to the Caribbean. Uniting them all, however, is a spirit of adventure.

Baystreet is a new leisure and lifestyle destination in Malta designed by BDG McColl. An internal open street provides a backdrop for the lighting, with a rotunda at its midpoint to create a performance venue. A glass bridge at the entrance leads on to retail walkways, also panelled in glass and underlit in white and coloured cold cathode. The faÃ§ades are lit using traditional architectural spotlights, together with kinetic colour change and pattern projectors. External terraces are bathed with dappled light with routes marked by LED. The Family Entertainment Centre features illuminated, colourgraded orbs interspersed with downlights and moving projectors.

Less exuberant, but equally dramatic is MBLD’s design to revitalise the Grand Hyatt Hotel in Berlin, where the contemporary design was felt to be rather stark. In addition to dimmable metal-halide luminaires providing simulated daylight illumination, colour projectors were employed to enact sunrise and sunset scenarios in the lobby.

Even environmental lighting of what could be deemed a sensitive nature is treated boldly by MBLD. The sculpture on top of Wellington Arch on Hyde Park Corner in London is entitled The Angel of Peace Descends upon the Chariot of War. The angel carries the offerings of a laurel leaf of victory and an olive branch of peace, and is an appeal against punitive reparations. MBLD used colour as a way of both telling the story and enhancing long-range visibility.

The angel’s wings are backlit in airy blues and the chariot’s descent into potential chaos and war in reds and warm tones. In addition, the protagonists’ faces and votive offerings are highlighted in white. “The use of colour, while being potentially controversial, was warmly embraced by English Heritage because of the appropriate way in which it supported the sculptor’s intentions,” said Rob Honeywill, MBLD Associate.

Designers must reclaim their trade from marketers