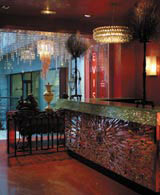 Cult Japanese jeans label Evisu is building up its British retail presence with the opening of its first UK store, and a concession in London, next year.

The concession – opening in Selfridges’ flagship Oxford Street store in March – and the store – opening on Savile Row at the end of 2004 – will both have interiors by Hassan Abdullah, who owns and designed the interiors for London’s Les Trois GarÃ§ons restaurant and Loungelover bar.

The move is part of the company’s ‘global strategy’, according to Evisu marketing manager, Europe Samantha Rosich.

‘[Evisu has] 40 shops all over Japan, and we want to show the rest of the world what we’re made of,’ she explains. Next month the brand will launch a four-floor, ‘metropolis of denim’ on Rue du Faubourg St. HonorÃ© in Paris (pictured), which is also designed by Abdullah, with a New York shop planned ‘in the near future’, adds Rosich.

The Selfridge’s concession, located on the men’s clothing floor, will have a ‘masculine, cabinet of curiosities feel’, according to Abdullah. The space will be furnished with antiques, golfing and fishing paraphernalia and a pitch pine fireplace, which Abdullah has adapted into a shelving system.

Rosich says plans for the Savile Row shop are still in their infancy, but she expects it to offer Evisu’s full range of clothing and accessories. Interiors are likely to incorporate themes running through the brand’s other shops, she adds.

Until now, Evisu has sold its fashionwear in the UK through a network of preferred stockists.