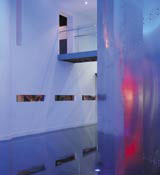 This year looks set to be a bit of a dazzler for cinema design, as multiplexes invest in branding and moves are made toward consolidation among operators.

Vue, formerly Warner Village, unveiled its FutureBrand-designed identity to audiences before Christmas (DW 18 December 2002), while the business press was rife with reports that Odeon, the UK’s largest cinema chain, would be bought out by one of its biggest investors, Robert Tchenguiz.

The Iranian-born property tycoon has already scripted a plan to merge Odeon and Vue. As the latter is London’s leading player and the best supporting act nationwide, this would create a dominant force in the market. Any deal is likely to require vetting by the competition authorities. However, with Odeon valued at around £300m, the notional tie-up shows how significant the UK cinema business has become.

In the meantime, Vue aims to generate greater brand loyalty and differentiation for customers.

Dennis De Rond, ex-FutureBrand creative director now at Design Bridge Amsterdam, says: ‘Normally, you don’t choose a cinema, you choose a film and then look for the nearest cinema. But the brief for Vue was to really create a brand for it. [So now] if Vue is a few blocks away and you know the quality of the environment, you will go there specially.’

De Rond says the logo created for Vue will reflect ‘different moods and atmospheres’ depending on the genre of film being shown. Vue marketing director Mark de Quervian has also pledged to refresh the interiors of the group’s cinemas.

Wolff Olins creative director Adam Throup agrees cinema-goers ‘do expect more, like [consumers] do from every leisure or retail experience’. The consultancy was responsible for Odeon’s identity revamp in 1998.

Throup thinks ‘delivering back some of the magic’ of a movie visit is the design challenge. ‘It’s about making it more than just a film [and] more than a transaction.’

Jestico & Whiles senior designer Michelle le Masurier says operators must consider ‘the complete experience’, from arrival at the cinema to departure. At present, it is often a case of ‘get in and get funnelled out again. You’re left dazzled on the street wondering what happened’, she explains.

Greater attention should be paid to the theatrical aspects of the foyer – as well as amenities like the toilets and the food and drink offer, le Masurier says.

Destination bars, like that created by Jestico & Whiles for the then Warner West End, can ‘draw people in’ and save them looking for another venue after the show.

But le Masurier also maintains that more thought can go into the design of cinema seats. ‘There’s scope for improving the sightlines and the back and head rests,’ she says. ‘And how about built-in storage for bags and coats? There could be more emphasis on comfort and being safe.’

A view of the future might be a Jestico & Whiles project in the Czech Republic that created a ‘gold class’ 24-seat auditorium with tables and waiter service. This may be viable in Prague, but how much would it cost in London?