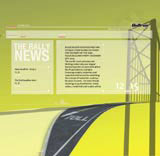 Digit is putting its foot to the floor with an interactive website for Bullrun, a trans-American car rally for high rollers and ‘petrosexuals’ that roars from Los Angeles to Miami this June.

The idea, dreamt up by British impresario David Green, is to stage an alternative to Gumball 3000, the real life auto-touring spin-off from 1976 film The Gumball Rally. Around 200 supercars are likely to take part, with drivers – paying £7500 for the privilege – stopping off at upmarket hotels and casinos in Las Vegas, Dallas and New Orleans during the eight-day, 2700-mile ride.

According to Digit senior producer Justin Vir, www.bullrun.com needs to ‘capture people’s imagination and create excitement’ in the build-up to the rally. ‘It’s not just to attract participants. It has to create a buzz and a fan base for the event,’ he adds.

Since only the start and finish of the rally are known to the drivers, the website uses a ‘first person view of the road’ as its central ‘metaphor’, Vir explains. The design team, comprising creative director Henry Brook, designer Willow Tyrer and Flash designer Adam Frankel, has set out to create a ‘sense of mystery’ about the journey, he says.

The website, which changes its look and feel according to day and night, includes a countdown to the rally as well as a news update. More interactivity will be introduced ahead of the 4 June start.

‘The audience is a sleek and sophisticated market,’ Vir says. ‘And the website is basically very cool. Bullrun is expressly not about racing, but it’s certainly to do with living the high life. It’s more Arena [magazine] than Loaded, or something along those lines.’