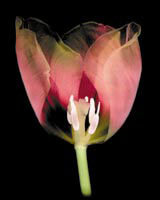 It’s ironic that Tara Bernerd – universally known as the It Girl of London’s interior design scene – should have created Art House at this year’s London Art Fair (which showcases art from approximately 100 UK galleries). She was formerly romantically attached to John Hitchcox, founder of the Manhattan Loft Corporation, and was a partner at Yoo, Philippe Starck and Hitchcox’s property and design company. Her company, Target Living, has undertaken such prestigious projects as the drop-dead deluxe interior of a Terry Farrell-designed house in Richmond. Yet the goal of Art House is to broaden art’s appeal – to demystify it by displaying it in a domestic context.

As with many of her other interiors, Bernerd filled the Richmond property with art. In theory, this makes her eminently qualified to create Art House, a 260m2 space, divided into an outer area – wallpapered to look like a giant gift, hung with relatively affordable artworks costing under £1000 – and an inner sanctum, festooned with blow-the-budget pieces by the likes of David Mach, Katharina Mayer, David Bailey and Irving Penn. Bernerd has also collaborated with B&B Italia, littering Art House with sleek furniture by Starck, Antonio Citterio and Terence Woodgate. ‘I’ve learnt from projects like Richmond that showing art in a home makes it more understandable,’ she says. Why was she picked to design Art House? ‘The organisers were looking for a young designer to create it, and I got a call from them,’ she recalls nonchalantly.

Given Art House’s populist aims, it’s ironic that the design pieces she’s chosen – including B&B Italia’s Marcel sofa, launched last year at the Milan Furniture Fair, which she’s covered with a bold check she nicknames ‘gangster plaid’ – are far too swanky to grace your average home. Did she pick them because she believed them to be equivalent, in terms of innovation and quality, to the art displayed? ‘No, I just chose what I liked,’ she says. Yet she says B&B Italia’s participation is particularly apt, given that its iconic Charles sofa ‘is a design that will last – a classic – and so is a good contender for being a fixture in an art show’.

In one sense, Bernerd is perfectly suited to the job of bringing art to Joe Public: as she lets on, she’s surprisingly ignorant about art, so she won’t be talking over other people’s heads. Until recently, she’d never heard of super-famous Mach. ‘I first came across Mach at the Royal Academy’s Summer Exhibition last year,’ she admits. And she is every bit the ingÃ©nue when asked whether she is painting Art House a burgundy lacquer to flout the gallery convention of displaying art on white walls. ‘I guess, if you don’t know the rules, it’s easy to break them,’ she says. She admits her choice of art, like her selection of furniture, is purely subjective: ‘Because I’m overseeing Art House, the choice of art will be mine completely. I like strong colour, I like pictures of people.’

Still, the Art House venture may confer on Bernerd a certain intellectual cachet. Who knows, she may soon be known not merely as an It Girl but as an Art Girl.

The London Art Fair is at the Business Design Centre, London N1, from 14 to 18 January.