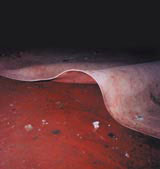 The public will continue to call it the Citibank prize, but the country’s foremost photography prize has morphed into the Citigroup Photography Prize – the kind of corporate tweak that matters only to corporations.

Whatever it prefers to be called, the Citi-thing prize – now in its eighth year – seems to have settled into a kind of prestigious maturity. Last year it was won by Juergen Teller, which gave it a bit of fashionable veneer. This year, however, it has opted for depth: of experience, range and vision. The oldest contender was born in 1930, the youngest 1952, and they represent the gamut of photographic endeavour. Flashes in the pan they are not.

Robert Adams, Peter Fraser, David Goldblatt and Joel Sternfeld all had important exhibitions last year: as with the Turner Prize, this is part of the award criteria. But this year’s prize is really for work that goes back a generation; for its influence on the subsequent state of the art. ‘They [the finalists] are in many respects “photographers’ photographers” who have not yet received the public recognition that their influence or work warrants,’ says Paul Wombell, director of The Photographers’ Gallery. ‘Their influence resonates through contemporary practice.’

The selection shows the deepening awareness of photographic history, says Jeremy Millar, one of this year’s four jurors. ‘I’ve had people disparaging this year’s choice to me by saying, “I didn’t know it was a lifetime achievement award”,’ says Millar. ‘But this shortlist at least shows a sense that photography has a history, which was indicated last year in retrospective shows like Cruel and Tender at Tate Modern.’ It’s part of the ongoing integration of photography into the wider art-historical field, adds Millar. ‘There’s this surge of interest in photography that wasn’t around ten years ago. You can see it in colleges, where art students are being exposed to photographic history, and vice versa.’

Of the four photographers, one is British – unlike the Turner Prize, the Citigroup has no requirement that the artist be based in the UK – and that is Peter Fraser. In a way (and without wishing to be nationalistic, of course) Fraser’s photographs are the most unusual and arresting, partly because, as one critic recently put it, he finds ‘beauty in the banal’.

Peter Fraser was inspired to become a photographer after seeing a William Eggleston show in the early 1980s. Eggleston, now in his 60s, has been called the ‘father of colour photography’, and his first one-man show at the Museum of Modern Art in New York included pictures of a dog drinking from a mud puddle, shoes under a bed, a children’s tricycle and an oven.

Fraser got in touch, and spent the summer of 1984 working with Eggleston in Mississippi. Fraser’s back catalogue, which includes images of washing on the line, a green shed, bare wiring protruding from a wall, an abandoned carton, a paper aeroplane, a sheet of corrugated plastic and little crumbs of rubble on a floor – the ordinary in all its extraordinariness – betray this lineage. ‘He divides opinion,’ says David Chandler, director of the Photoworks agency. ‘Some critics can’t stand Fraser’s work. But to me, he’s the photographer who has most absorbed the post-World War II American tradition – found in literature as well as the visual arts – of finding the sublime in unlikely places.’

As director of the Brighton Photo Biennial, Jeremy Millar showed Fraser’s work in 2003 and admires it for its weird and tangential observation, and the way it brings out ‘the thingness of things’. (If that sounds baffling and/ or pretentious, have a look at ‘Two Blue Buckets’, one of Fraser’s most celebrated images, and it’ll seem less so).

Is it significant that Fraser has worked with Martin Parr, with whom he shares an alma mater in Manchester Polytechnic’s photography department in the early 1970s? Some of Parr’s Signs of the Times-era photographs seem akin to Fraser’s in the way they focus on the humdrum. Millar isn’t so sure: ‘Martin Parr’s work is extremely judgmental; about society. Peter’s isn’t: it’s more complicated and poetic.’

The latter word is used a lot about Fraser’s work. His ex-dealer, Maureen Paley of Interim Art, thought them ‘like a sad and desolate poem’. Critic Johanna Burton, who has written a catalogue essay for the Citigroup Prize, thinks that Fraser is in the business of ‘making strange – as if strangeness itself was the most natural thing in the world’.

Certainly, his work has a psychological edginess. There’s a toxic feel to Fraser’s photographs of technology, such as his series called Deep Blue (named after the chess computer that defeated the world champion Garry Kasparov), wherein he visited hi-tech sites such as Nasa space centre and took images of machinery, such as a robotic arm against a lurid pink background. In another series, called Material, Fraser took close-ups of electronic circuit boards and his hawk-like resolution uncovered a garish netherworld of matter.

Fraser’s pictures require a bit of a rethink: to see content in its absence. They remind the viewer that Egglestone’s photographs were at first derided for being of nothing; that is, they weren’t heroic pictures of mountains or people. Fraser himself ‘tends to choose a different strategy with each series of photographs, to approach the same underlying preoccupation. I’m personally inclined towards what could be called a peripheral use of photography because of the way I see the world.’

Could we identify a Fraser-ist strand that has come out into the wider field of commercial art? Well, Rankin shot a series of household objects for Honda recently, bringing out their object-hood by way of extreme close-up, and something of Fraser’s method – the found still-life – seems to have filtered through into the world of mass imagery. But it’s hard to think of his work being used to sell anything – not even blue buckets.

Of all the photographers up for the prize, David Goldblatt conforms most to the documentary photo-journalism tradition for his photographs delving into his home country, South Africa. They follow on from fellow South African (but entirely different) images from Roger Ballen that were in the then Citibank Prize two years ago, but while Ballen concentrated on the Afrikaaner community, Goldblatt’s monochrome images tend to examine and document the Black life experience, recalling Sebastaio Salgado in his images of workers. Goldblatt claims an interest in ‘real things’; his motivation being ‘to probe the immediate world I lived in’.

To British eyes, Joel Sternfeld’s colour photographs immediately deliver a hit of Americana: there’s a desert swimming pool with solar devices on it, a father and daughter in Canyon County, California seen against a new ranch house (pictured above) and an image of a little shack selling pumpkins, all taken from his exhibition American Prospects, which was seen last year at the Photographers’ Gallery. Sternfeld hopes they communicate ‘a simple truth of place’: it is difficult not to see something mildly sinister in them.

Both Robert Adams and Joel Sternfeld (see below) work in the tradition of what Jeremy Millar describes as the ‘American poetic vernacular’, a strand that comes via the early to mid-20th century work of photographer Walker Evans. ‘There’s a lineage of looking at the work around you in an unobtrusive way,’ says Millar, ‘allowing it to reveal its meaning’. Nominated for his part in Cruel and Tender at Tate Modern, we’ll be able to see Adams’ series What We Bought: The New World, taken in the early 1970s, in which the hell of the retail shed and shopping mall-land of Denver Colorado can be revisited.

Gensler’s Chris Johnson makes the board