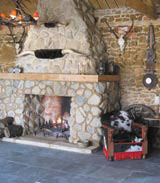 When Shaun Clarkson, designer of some of London’s most popular bars, decided to start an upmarket, self-catering holiday home it was a safe bet the result wouldn’t be anything less than extraordinary.

And when Cliff Barns, the gloriously named fruit of his labours opens in Norfolk later this month, the first paying guests shouldn’t be disappointed. Instead of the chintzy, cluttered interiors of many holiday lets, Clarkson has had fun creating an eclectic ‘rancho-deluxe-meets-English-baronial’ vibe, complete with four-poster beds, a Spanish fountain, sauna and even an outdoor hot tub. The good people of Narborough won’t know what’s hit them.

Now three months over schedule, the project has proven to be a labour of love for Clarkson and his business partner Russell Hall, a set designer who will run the 18-bed venture. They found the century-old barn after a two-year search, converting it into a stylish retreat around a courtyard with six double bedrooms, five luxury bathrooms, and a children’s bunk-house, all, they promise, measuring up to the standard of a first class hotel. There’s even chef and shopping services for hire if the self-catering turns out to be a bit too much like hard work.

The joke name of Cliff Barns – after the character in the TV soap Dallas – stuck and Clarkson warmed to the Mexican hacienda theme, commissioning huge stone fireplaces and sourcing hunting lodge paraphernalia (‘I’ve become quite friendly with a taxidermist in Norwich,’ he says). Two splendid, rustic four-posters have been hand-built from silver birch trees, with logs for feet. Bright red leather is used to trim cow-hide-patterned armchairs, others are upholstered in tartan. A custom-made table of reclaimed wood seats 25 – the hope is to hire it out for weddings and other functions. A beach house at Old Hunstanton will follow in the spring.

It’s all, says Clarkson, ‘slightly tongue-in-cheek’, without being kitsch.

‘It’s not stuffy but a bit rock ‘n’ roll. Like home but more stylish,’ he says.

If moving into the self-catering holiday home business seems like an unusual move, Clarkson’s journey into interior design was unconventional in the first place. Now 42, he trained in fine art and set up as a sculptor working with found objects, while at the same time indulging his passion for bars and clubs – a love of socialising inherited from his parents.

After five years of relentless work and exhibitions, future restaurateur Oliver Peyton, then working for Absolut Vodka, spotted Clarkson’s work in an exhibition. At the time his pieces were tongue-in-cheek – they included winged irons and decorated vacuum cleaners – but they impressed Peyton enough for him to ask Clarkson to come up with an installation piece in a bar to promote the vodka brand. This initiated an 11-year association with Absolut, producing visual promotional ideas and events; Clarkson eventually became the company’s main creative consultant. Then, in 1991 he designed his first interior – for Peyton’s first club, Raw.

‘I just did it. I learnt about the business by working in it,’ says Clarkson, freely admitting that one of his early motives was ‘the chance to get into the coolest places in town and drink for free’.

Clarkson has gone on to design many London nightspots, including Jerusalem for Eric Yu, Denim and Browns for Richard Travis and The 10 Room for Terry Pullen. Having just finished an upmarket restaurant in Chelsea, he is now turning his hand to a bar in Ipswich, plus a new concept for Denim and a restaurant for Plymouth Gin at its experience centre in Plymouth.

‘I’m hired for being creative. I’m good at colour, atmosphere and the vibe of the thing,’ he said. ‘I just bring everything together.’

As well as the interior design, he works as a creative consultant to brands such as Perrier JouÃ«t Champagne, Red Bull Heineken and Coca-Cola. He also has an events business – jobs have included a £150 000 party for Red Bull, where he transformed a London studio into seedy downtown LA.

Clarkson has a dual lifestyle. In the week he lives in his Shoreditch apartment – a popular venue for photographic shoots, which have helped fund Cliff Barns – and admits he’s out and about so often he rarely turns on the cooker. At weekends, he’s off to his own holiday cottage – this time a chintzy one, also in Norfolk.

Clarkson hopes that Cliff Barns will be the first step in a new property-oriented direction.

‘I need to be challenged all the time. I’m not bored, but it is getting easier,’ he explains.

That doesn’t mean he has any intention of giving up the bar and restaurant design work, which he obviously adores.

‘I wouldn’t ever give up the business unless it gives me up.’