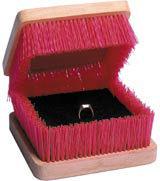 Berlin’s ‘Blindenanstalt’ (Institute for the Blind) isn’t in the tourist guidebooks. It’s a large, scruffy building with a whiff of dilapidated grammar school, located in one of the city’s edgier districts, far from the glitz of Potsdamer Platz. You certainly wouldn’t mistake it for a hive of contemporary design activity. But since an enterprising design duo took it on as a project five years ago, the likes of Michael Marriott, Shin and Tomoko Azumi, Matali Crasset and Konstantin Grcic have swung through its creaky doors. What has attracted international designers of this calibre to a 125-year-old German institute?

Vogt & Weizenegger, formed ten years ago by Hermann Weizenegger and Oliver Vogt, has established itself in Berlin as a graphics, interiors and industrial design group. But its most interesting and best known collaboration is with the institute, which was founded in 1878 and produces a sideline in brush and wicker products – traditionally a blind workers’ trade. Until five years ago, the blind and partially sighted workers churned out uninspiring pieces with small runs to equally small audiences. But the duo saw the potential for a more design-led approach.

‘We passed the institute every day on our way to work,’ says Weizenegger. ‘After the Berlin Wall came down [in November 1989], lots of local businesses and workshops closed down and we thought the same would eventually happen to the institute. So we approached the owner.’

That was in 1998. The approach resulted in Weizenegger and Vogt setting up a small in-house design studio, called Die ImaginÃ¤re Manufacktur (The Imaginary Factory) and designing a series of products. Experimental in nature, these were developed with design students. The range was a success and the pair then contacted more established creatives, including Marriott, Crasset, Grcic and MartÃ­ GuixÃ©, among others, to design brush or basket products for the nascent DiM brand.

‘We never intentionally approached interesting or well-known designers,’ says Weizenegger. ‘We just asked people we knew.’ That’s quite a contacts book. Marriott, who was contacted through a mutual friend, designed a CD rack where the CDs nestle snugly between brushes on a curved beechwood base. He was attracted to the material, the fact he was learning a new process and by the project’s social benefits. ‘The institute was struggling against cheap, imported plastic brushes and its market was shrinking,’ Marriott explains. ‘By positioning itself in the design and gift market, it has turned itself around and made the work more interesting for those people making the products. It was a nice experience for me, too.’

By the time the Azumis met Weizenegger and Vogt last year, there were few products left to be designed, says Tomoko. ‘It had all been done, so our task was tough,’ she says. In the end they designed a cat flap from horsehair and beechwood, which has since become a best-seller.

‘Working with a local institution with strong connections to local people was a fresh approach for us, and added a different dimension to our work,’ adds Tomoko. ‘DiM is a great example of how design can help benefit a social project.’

For designers, the attraction of working with DiM is the close relationship they can develop with those who craft the products, agrees Weizenegger. ‘Most designers work for clients and deal with managing directors, marketing directors and product managers. Those who actually develop the final products aren’t party to the discussions.’

You’d be hard-pressed to find a design in Vogt & Weizenegger’s portfolio that doesn’t make you smile. Another best-seller is a rendition of Berlin’s iconic Brandenburg Gate, designed by the duo themselves. It sits alongside a plate with a brush attached called Flying Saucer, created by Isabel Hamm, a pair of false teeth (complete with a black or gold ‘tooth’) by JÃ¶rg Hundertpfund and Crasset’s jewellery box. All are made out of brush fibres. The wicker products are as creative. Two of Us is a pair of trousers, also by Hundertpfund, and Radio Block by Sebastian Bergne is a wicker radio cover with a hole for the aerial.

Clearly, humour is hugely important to DiM. The nature of the materials themselves, brush in particular, has a humorous quality. It’s tufty, quirky, bristly and tactile, and is somehow funny.

‘Products made by disabled workers often have a tragic quality about them. But staff here enjoy the work. We don’t want people to feel sorry for us, or buy something from us and feel somehow redeemed. The work should be strong enough to speak for itself,’ says Weizenegger.

This may be true, but it’s hard to ignore the social implications of the project. Vogt & Weizenegger and its collaborators work for free with royalty payments, and the duo spend a few days each month on-site. The institute makes no profit. It’s funded by the State and trains its workers for a real trade. A total of 44 people work there and many have been there for 20 or 25 years. But rent is on the up as the area starts to develop, so there’s no doubt the success of DiM will help it, or could even save it.

Commissions for existing designs, or new ones, now come thick and fast. The Brandenburg Gate is a favourite for big corporate clients and, most recently, a Japanese company wanting to give its employees an off-the-wall Christmas present. Large orders can be turned around in up to three weeks, and stockists include London’s Conran Shop as well as boutique design shops and museum outlets across Europe.

DiM’s international appeal first became apparent when it exhibited in Frankfurt a few years back, says Weizenegger, and it has since staged various shows in London, Milan, New York and Tokyo. ‘It’s difficult for a small company like DiM to compete internationally,’ he admits. ‘We’re up against companies like Cappellini which have huge PR and marketing budgets and work with really interesting designers.’

DiM can certainly claim the latter. Weizenegger always has his eye out for new collaborations, and welcomes ideas. The institute’s future, it seems, is bright.