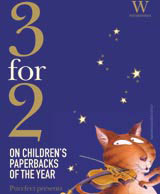 For the book trade, perhaps more than most, Christmas really does come but once a year. Any day now, Waterstone’s marketing director Lesley Miles will probably be unwrapping her seasonal sales figures and hoping for financial good cheer.

Last year, Waterstone’s like-for-like sales were up 5.6 per cent, a significant spike when full year growth to July 2003 was merely 0.9 per cent. According to the company’s annual report, ‘a well-executed marketing strategy’ played its part.

However welcome this festive fillip though, last month’s promotion is one of six major campaigns run by Miles during the year, including summer reading and the big academic pushes at students.

Since 1995’s abolition of the Net Book Agreement, which limited discount pricing, the book market has pulped its fusty, cosy, Charing Cross Road-type image. To compete against supermarkets, on-line specialists such as Amazon and high street entrants like Borders, Miles commissioned Conran Design Group to review Waterstone’s collateral in March 2003.

The results are by no means a typical rebrand, but they certainly clarify the retailer’s presentational themes. The original identity by the then Newell & Sorrell has been given a contemporary tweak and stylish illustration is now prominent in-store (DW 23 October).

‘Specifically, we felt we weren’t sufficiently differentiated,’ Miles explains. ‘Waterstone’s is the market leader, it sets the trend, it has the highest customer recognition. Anything we do, people tend to copy – so we felt over last couple of years that other retailers had attempted to mimic Waterstone’s techniques, and we always look to be one step ahead.’

CDG helped to focus on the ‘real strengths and some of the origins of the brand’. The gold logo and black bookcases were ‘integral’, she adds, but one of the main tasks was to strike a balance between Waterstone’s traditional values and its commercial realities.

‘What was impressive about [CDG] was its understanding of where we were in terms of development… we wanted to maintain the core essence of the brand while recognising we’re in a fast-moving, highly competitive environment,’ says Miles. ‘CDG’s work was very flexible within rules, so from a practical point of view we’ve been able to implement it without running across things that look beautiful, but actually don’t do the job.’

With the old, bookwormy Waterstone’s, you got the feeling sales were not to be discussed in polite society. Now that the chain is owned by HMV Group, the talk is of improved stock turn and better margins.

Miles believes design can convey competitive and premium cues. For instance, in-store communications use a mix of fonts: New Baskerville, ‘a very literary type’, is supported by Din, ‘a much more direct type of message’, says Miles. ‘And the other thing is not to be ashamed if you’ve got an offer. So, if we are doing a three for two campaign we tell customers. It’s nothing to be embarrassed about, quite the contrary.’

Miles speaks with the no-nonsense directness of a career marketer. There’s little superfluous in what she says, which is rather fitting as she describes Brighton Rock – by the famously economic Graham Greene – as her favourite book. Mind you, idle chat with journalists may not be the best use of her Wednesday morning.

‘I’m actually a real bookie,’ Miles adds, less guardedly. (Dear reader, she means a book lover, not a turf accountant, and Mark Haddon’s The Curious Incident of the Dog in the Night-Time was one she enjoyed last year.)

‘I wouldn’t profess to have the booksellers’ depth of knowledge,’ she continues. ‘[But] I’m a complete bookie and I really do like retail. I like the fast-moving nature of it and I always was a Waterstone’s shopper, so in that sense it’s kind of a dream job for me.’

Miles is responsible for ‘all elements of customer-facing activity’. In addition to working with architect Grieg and Stephenson on interiors, she sets the tone for a brand where ‘sharing that passion for books is what we’re all about’.

According to the brand guidelines, prefaced by Miles, the ‘imposing, elegant and instantly recognisable’ facia is Waterstone’s biggest brand statement. The company is very particular about its terminology. ‘Bookseller’, ‘publisher’ and ‘branch’ are commendable; ‘staff’, ‘supplier’ and ‘shop’ should all be avoided.

Taken together, this reads like a bookstore version of What Not To Wear, an impression endorsed when Miles sashays Trinny and Susannah-style from her rouge-walled office to see me off.

Classic yet contemporary, mainstream yet clearly a cut above, Waterstone’s makeover seems to fit the analogy, not least because books are rather voguish following the BBC’s The Big Read and The Guardian’s highbrow Review supplement. As with clothes shopping, Miles knows there’s something tactile about buying books that all the efficiencies of the Internet are unlikely to replace.

‘Customers like to browse, they like to touch the books and feel the books and the pleasure of shopping on the high street is massively enhanced for people who love books by going into Waterstone’s. It’s something they look forward to in their day,’ she says.

We’re letting off Howard Smith Paper just this once