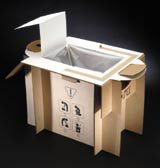 This year’s Industrial Design Excellence Award-winners have been announced by the Industrial Designers Society of America. More than 1400 entries were whittled down by a jury of 17 experts to award a final list of prize-winners.

There are 12 different categories in the awards, in which a grand total of 130 prizes will be awarded. Reaping the largest individual crop of awards was product design consultancy Ideo, which claimed ten prizes overall, including six Golds, two Silvers and one Bronze.

Consumer products is the largest category. The technological vanguard of consumer innovation is rewarded, with Apple’s iPod Mini claiming one of seven Golds, alongside the Nokia 7600 telephone/gaming hybrid. However, this category is not just about gizmos – Golds are also bestowed on the Kestrel Airfoil Pro Triathlon bicycle by Ide, and Ensalada, a salad set by Mint.

The business and industrial section was also choc-full of innovation, with three Golds awarded. Two went to Ideo for its Deep Lift Pump and Vocera communications badge. The third Gold was awarded to UK groups Alloy Total Product Design and e2v Technologies, for their Argus 3 thermal imaging camera, designed for use in extreme environments, such as emergency rescues.

Top spot in the computing category was predictably occupied by Apple Computer’s G5, but was shared with another Ideo product – the Logitech Keycase, a protective case for a PDA made of ‘smart fabric’, that folds out into a functioning Qwerty keyboard. Also claiming Gold awards were Samsung’s hi-spec new LCD screens, and Hewlett Packard’s scanjet 4670, a free-standing scanner, which takes up less desk space by using an easel. Ideo clocked up another Gold with the Florence concept collaboration with Intel, for the future of home computing.

In the transport section, awards were given for the hot-rod styled multi-purpose Chevrolet Super Sport Roadster, alongside the more eco-friendly Toyota Prius hybrid car. The other two Golds were taken by the BMW R1200 GS motorcycle, and the Upper Class cabin design of Virgin Atlantic airliners.

Only three categories had one clear, outstanding Gold award winner. The top award for design strategy went to Fuseproject for Birkenstock Footprints: The Architects Collection, while for packaging and graphics, Smart Design’s Simplehuman packaging and brand identity won the day. In the digital media and interfaces section, the prize was taken by Pentagram for the Mohawk Paper Mills website, which ironically uses the Internet to sell paper.

In the furniture category the sole Gold award went to the Contessa chair by Guigaro Design, Italy. The chair embraced the sense of environmental awareness that has run through many of these awards by incorporating materials with low chemical emissions, and making Contessa 95 per cent recyclable.

The Idea award ceremony will take place in Pasadena, California, on 27 October.