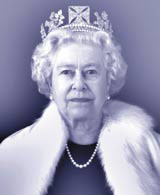 He has done retail work, with installations for Parisian fashion store Colette and Future Systems’ Selfridges store in Birmingham, as well as light sculptures for restaurant Sketch. He also collaborated with Collins and United Visual Artists on the club Kabaret’s Prophecy in Soho (DW 24 June), for which he designed a central laser feature, to sit alongside UVA’s centrepiece LED walls.

Experimental fashion designers such as Alexander McQueen and Issey Miyake are all Levine clients – he has even produced laser installations for catwalk shows. Last year, he created a laser for shows by the band Massive Attack, with set and LED graphics by UVA.

The Queen portrait has bought him into contact with the Daily Mail, but Levine’s most important new venture is Plugg, a lighting label he started with his old collaborator, photographer Mario Testino. Levine is soon to launch the second Plugg product, called Laserpod. It’s a laser and LED-based light with a Swarovski crystal at its core, which projects what Levine calls ‘ambient organic light forms’. It launches later this summer. ‘It’s been developed with Andy Hobbs of the Gadget Shop, who thinks it’s going to be the next lava lamp,’ says Levine. ‘It encourages people to interact with light. It’s the only thing I’ve ever patented.’

At this point, it might be time to mention that Levine once had a drink and drugs problem. He brings it up in conversation unprompted. ‘I’ve been clean for 14 years,’ he says, citing the search for new experience as a motivating force. ‘My innovative side comes from seeking experience, to the point of it being a problem. And light has been part of my solution. It’s natural – light propagates life. It makes a flower grow.’ In life, as in art, Levine has discovered the importance of what he calls ‘changing form’.

Equanimity is exhibited at The Queen’s Gallery, Buckingham Palace, London W1A from 17 July to 3 October. Another version will be on show at The Jersey Museum, St Helier, Jersey from 23 June until 2006

Wolff Olins creates gem of an identity for principality