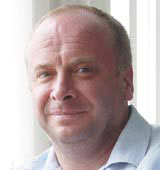 Enterprise IG has promoted executive creative director Dave Brown (pictured) to the position of UK chairman. The post was previously held by Terry Tyrrell, who becomes European chairman of the group.

Brown has overseen the development of the creative team at Enterprise IG since 2001 when Tempus Group, the owner of his BrownKSDP consultancy, was acquired by Enterprise IG parent company WPP.