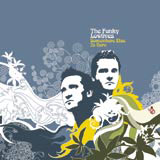 Peacock Design has created a set of record sleeves for The Funky Lowlives. The design consultancy has designed covers for the artists’ forthcoming LP, entitled Someone Else is Here, and the single Til I left the Music, which are both due to be released later in the year. Independent label Outer Recordings approached Peacock after seeing the group’s work on a campaign for the Music Week Awards and asked the consultancy to come up with a similar feel for the next Lowlives album. Peacock responded by incorporating rendered headshots of the band members into the artwork as part of the illustration, which features waves, leaves and butterflies in vivid swirls. The album is scheduled for release in October.