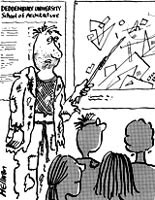 The end of an academic year. After months in which I’ve been telling students that time is getting short and that they’d better start seriously drawing up their final thesis designs if they want to pass, they are, for the first time, showing signs of nerves. “Any more tutorials?” they inquire, their casualness giving way to something with a tinge of desperation. No, I reply amicably, but mercilessly. That’s it. You’re on your own now. I don’t say: perhaps you should have shown your faces a bit more often during the course.

As their concerns mount, mine start to fade. For two reasons. First, I know that they’re mostly OK. Some of these students are even quite good, although it would never do to tell them so; they might get complacent. And I’m looking forward to the final reckoning, as it offers the entertaining prospect of colleagues getting heated and sulky as they see their own students being marked down dangerously close to the “fail” percentage. We tend to be hard markers at my school.

But the second reason I am a picture of relaxation and bonhomie is that I’m demob happy. I’m giving up this tutoring lark. For the time being, at any rate.

Looked at dispassionately, I’m not exactly relinquishing a vocation. One day a week in term time, overseeing postgraduate students’ diploma projects, could hardly be counted as a huge investment of time or intellect. And anyway, I got into it by accident. Curiously, it was when I was pondering whether to take an MA or a PhD myself – something always lurking in the back of my mind as a desirable possibility, although what use they would be is anyone’s guess – that the call came from a reasonably OK new university. One of their tutors had gone AWOL. Would I help out? My being unqualified either as a designer or a teacher seemed not to matter. So I came in half-way through a one-year course. They invited me back and I set up a project for the next year which was more to my taste. It is now almost complete. And I reckon it’s time for me to get out. Here’s why.

Many design academics are also jobbing writers. It gives them a profile and a wider audience for their critical judgements, and it supplements their meagre earnings. And they really are meagre: I was startled to find out how little university teachers are paid in Britain. Every month, when my tiny stipend arrives in my bank account, I am newly amazed. This is pocket money. If I was full-time, it would still be pocket money. But I come from the other side: I am a full-time writer who happens to have developed a sideline as a jobbing academic.

I never thought of myself as being especially well-paid until the head of my school invited me to do a lot more for them. I crunched the numbers. This was embarrassing.

Sorry, I had to say – never mind whether or not I wanted to do more university teaching, the fact was that I could not afford to do so. The more I taught, the less I earned, because it displaced my other work, fees for which are calculated more realistically according to supply, demand, perceived expertise, and an ability to negotiate. Surely such an academic poverty trap could happen only in Britain. Now I understand the phenomenon that used to be known as the Brain Drain. But I don’t want a well-paid university job in Berlin or Chicago or Melbourne. London would be nice, though.

It is a clichÃ© that those who can, do and those who can’t, teach. Or, of course, write. So the people I have most learned to admire during my short, enjoyable, and regrettably self-subsidised stint in academia are the practitioners – not the useless ones with no work who are teaching to make ends meet, but the real, fee-earning designers with offices to run who are prepared to share their skills with the next generation and earn bugger all for doing so. They, of course, can recruit cheap student labour and get free ideas, so it’s not wholly altruistic. But what’s in it for me?

I’ve found that I can teach a discipline I have never practised myself, as I can’t design for toffee, and my degree in English Literature is, frankly, of little help. And I achieve the impossible by working in tandem with one of the real practitioners described above. This double act seems to work.

But having proved it can work, I can’t really see any reason to continue doing it. I can’t recruit these students to help me write, after all. So, farewell academia. I may not be back. Unless the money improves, of course. As Jack Dee once remarked: hypocrisy may not be attractive, but it is, quite often, lucrative.