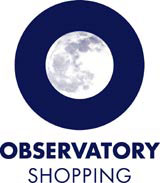 The Observatory Shopping Centre in Slough, Berkshire, has introduced a new identity created by Zulver & Co.

Owned by Savills Fund Management, the centre was originally opened in 1989. The primary objective of the revamp is to attract new tenants and shoppers.

Taking the name of the centre as its theme, the new identity uses the ‘O’ of Observatory to form an image of the moon as viewed through a telescope.

The centre’s name is shortened to Observatory Shopping, and a constellation theme has been applied to interior signage.