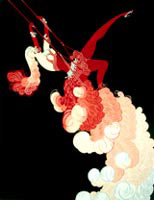 Theatre historian Charles Spencer is a man with a mission. Not only does he want to bring the artwork of top theatre designers past and present to a wider audience, but he’d like it to be better recognised by the art and design establishment.

Spencer was almost solely responsible for bringing the distinguished French artist/ designer ErtÃ© to Britain’s attention in the 1960s, curating ErtÃ©’s first UK exhibition in 1967 and, three years later, producing a book on him.

“Nobody here knew who ErtÃ© was, even though he’d been famous in France since the 1920s. I encountered a lot of snobbery in the art world because ErtÃ© worked for the Folies BergÃ¨res, which was considered vulgar,” Spencer reveals. But there was huge popular interest in ErtÃ©’s Art Deco style and he was “taken up” by iconic figures of the time such as Twiggy and The Beatles.

When Spencer’s exhibition was put on in New York, the Metropolitan Museum bought up the entire display even before it opened, so highly did they rate ErtÃ©. Primarily an art historian and lecturer, Spencer went on to write books on the Russian stage designer Leon Bakst, Serge Diaghilev and Cecil Beaton, accumulating in the process a huge store of theatre artwork.

Now Spencer’s treasure trove is going on display at the National Theatre in The Musical Years, an exhibition loosely following the chronology of the musical theatre, from The Beggar’s Opera (1728) to productions of My Fair Lady and Fiddler on the Roof in the late-1970s, and, most recently, a revival of The Pirates of Penzance at Regent’s Park open-air theatre last year.

As you would expect, ErtÃ©, Bakst and Beaton are well represented, but it comes as something of a surprise to find a lithograph by Henri de Toulouse-Lautrec – yours for a mere £500 – of one of the dancers at the Moulin Rouge. Lesser known French graphic artists, such as Charles Gesmar and Louis Gaudin, known professionally as Zig, are also worth looking out for.

Sadly, the work of contemporary British designers is in short supply, with the exception of Terry Parsons, Mark Negin, Tim Goodchild and Shirley Russell, whose costumes for her ex-husband Ken’s film of The Boyfriend are displayed here.

Since he also collects design artwork from the movies, Spencer has sneaked in a few. (It would be good to see a major exhibition of film artwork at the Hayward or Whitechapel galleries, concentrating on half a dozen high-profile movies.)

All the works on show are for sale and, since most are both tasteful and intriguing, it’s doubtful many will be left unsold by the end of June. There is also the investment factor. When Charles Spencer mounted his first ErtÃ© exhibition in the late-1960s, the pictures were priced from £25 to £125. Now his pictures fetch upwards of £20 000. Bakst has appreciated at an even faster rate.

Spencer, a lifelong collector of art, says he prefers Oriental and Russian art to the work on display in The Musical Years, though he does admit to having a favourite piece. “It’s a beautiful sketch of a costume worn by Angela Lansbury in the show Dear World by a Dutch-born dancer and artist named Freddy Wittop. I’d definitely give that house room,” says Spencer.

The Musical Years is in the Lyttelton Foyer at the Royal National Theatre from 12 March to 30 June. Admission is free

Wilson Harvey look for the DTI

Gill tours House for the Future