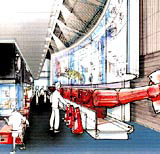 Building work on the National Coal Mining Museum refit is to start next month after the attraction approved Northcross Group’s detailed designs. The £6.2m National Lottery-funded project is due to open in March 2002. Installation work is likely to begin in September or October.

Northcross was appointed without a pitch and has been working on the project for more than five years, according to managing director of its York division Nick Townend. Its fee is understood to run to six figures. Townend declined to comment.

The museum, which is near Wakefield, will be redesigned to tell the social history of coal mining communities in an emotive drama/ documentary style. It will also exhibit much of the British Coal Collection that has previously not been on display.