‘The work would be great if it wasn’t for the client,’ says a friend of mine. He believes most clients are creatively illiterate. But if a client had hands-on creative training, would he or she be a better client, or would they just get in the bloody way? Is going ‘client-side’ from a creatively led company therefore the ideal?

If my conspirator in arms, David Law, is to be believed, design is a vocation rather than a profession. It’s for life. While ‘client-side’ isn’t for him, clearly some designers find it appealing. I don’t buy the idea that working client-side is boring and limiting. Jonathan Ives has no problem at Apple. Isn’t it just the same as Michel Gondry moving from doing White Stripes videos to directing The Science of Sleep film? A simple move to explore another of the challenges available to today’s creative minds?

One of the first ‘Mr Client Sides’ I knew was David Magliano. I met him when he worked on the Go airline account at HHCL. He was soon offered a position as marketing director at Go. There were lots of ‘oooh, you traitor’ and ‘sold out to the other side’ gags flying around, until the agency realised he could either make life a nightmare for the them, or oil the wheels for a smooth, satisfying relationship with the airline’s management. Fortunately, the latter turned out to be the case and everyone was happy. Roll out the awards.

However, it’s not all trips to award ceremonies. A recent spat at Publicis saw Asda walk away after a senior account man turned gamekeeper, and moved the account. When this happens it’s a big deal. We’re talking multimillion pound deals here. Jobs lost, game over. Most client-side moves are handled with kid gloves. After all, most creative groups are only five phone calls away from closure.

But what is it like to work with one of these ‘job chameleons’? Can it really work, or are you ‘once a creative, always a creative’, destined to stand out in a crowd with your wacky combo of sneakers and suit?

We work with several such ‘crossovers’, and find it nothing but rewarding. One such creature is an ex-ad man who is now a paid-up member of the corner-office owning, chief marketing officers’ club. What’s notable is that we actually collaborate! There’s no master/servant stuff going on, we work together with one aim: great work. He’s transparent about finance, we’re quick to come up with the goods. In short, it works because there’s none of the mucking about there is in so many traditional design groups, and because there are no account directors.

I went semi-client-side last year, holding a three-way pitch for a large advertising account on behalf of one of our clients. (It needed a local agency in Russia.) It was fun and the client was thrilled, as we’d cut through the ad-babble and knew exactly the right questions to make each group shine or crumble.

Interestingly, there seems to be a new animal out there, too. A kind of semi-crossover, a kind of ‘inside-out marketing department’. Several of our large, multinational clients have created these. A client commissions (but doesn’t employ) a top-level former executive from an ad agency or design group to form a pod that cherry-picks those required for the project. It’s an entirely bespoke team and an incredibly efficient approach, too – clients just pay for the talent, not the typists.

There are some brilliant marketing directors out there who’ve never been on the other side, but just as creative definitions are moving – ad agencies are winning Design Week Awards, and design groups are making great ads – clients are increasingly mixing up the people who sit between the owner and the creative.

I believe a ‘golden age’ of creativity occurs when creatives are allowed more direct access to creative brand owners. Look at Alan Fletcher’s work. It’s brilliant because of his skill, but also because of his direct relationship with the person paying the bill. Perhaps we could be heading towards another truly imaginative period. After all, with more creatively sympathetic people behind a big idea, the more chance it has of becoming beautifully made.

Simon Manchipp is a founder of SomeOne 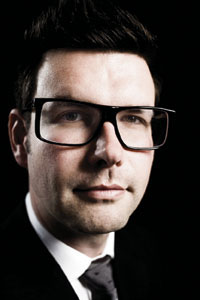 Unpaid pitches are bad for clients and consultancies alike