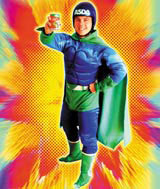 In an unbiased piece of research, Vauxhall has revealed that some of the most innovative ideas around are generated in, you’ve guessed it, cars. Vauxhall cars, no doubt.

And nearly a fifth of those questioned believe that ‘putting their foot down on an open road’ fuels creative thinking. All of which is a bit worrying for other motorists and pedestrians, who are potential victims of, well, road rumination, with drivers zooming along at 70mph, lost in thought, designing the next clockwork radio in their heads.

The study also reveals that one in five British architects say they’re most creative while asleep, which might explain some of the more nightmarish structures gracing our skylines.