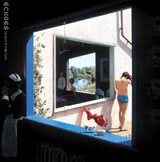 Pink Floyd’s latest album Echoes, which was released on Monday, has been created in partnership with the Future Forests environmental initiative. The partnership will result in the creation of four long-term indigenous forests in Scotland, India, Mexico and the US. The album carries the Carbon Neutral symbol to signify that a sufficient number of trees will be planted to absorb the carbon dioxide emissions caused by the production and distribution of it. Therefore, by selling more albums, it will mean that more trees will be planted as a result. The cover was art directed and photographed by long-term Pink Floyd collaborator Storm Thorgerson.